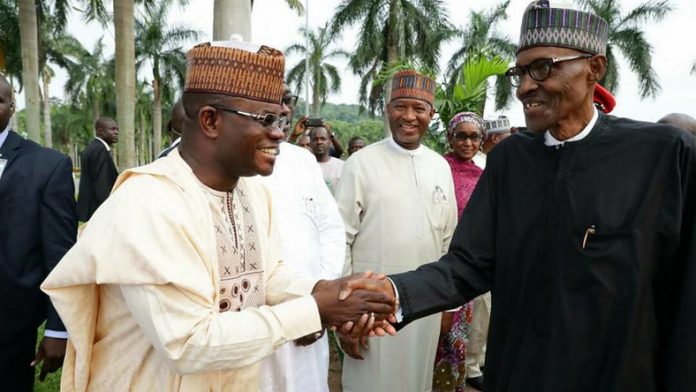 The Peoples Democratic Party (PDP) on Tuesday challenged the request of N10.069 billion Commissionaire Notes for the Kogi State Government one month to the governorship election, requesting the National Assembly to specifically approve the demand for payment of workers salaries.

Accordingly, the PDP told the National Assembly to invoke its statutory powers and directly channel the N10.069 billion Presidential funds for payment of salaries and pensions of suffering Kogi State workers.

The PDP in a statement by Kola Ologbondiyan, National Publicity Secretary, argued that “it is scandalous that the Buhari Presidency, with its claims of transparency and integrity, would seek to mislead the National Assembly by asserting that the fund is for projects done by the state government on behalf of the Federal Government, when in reality no one can point to any such project executed by Governor Yahaya Bello in the last four years.”

The PDP argued that it is endorsement of corruption and inexcusable injury to the people of Kogi State, for President Buhari to seek to direct funds to Governor Yahaya Bello, for phantom projects, and neglect the Kogi workers many of whom are owed salaries and pension in arrears of 36 months.

The party maintained that such action by Mr. President further confirms that the All Progressives Congress (APC) is directly in league with Governor Yahaya Bello to strangulate the people of Kogi State.

The PDP held that if there are no intentions of pushing the fund to Governor Bello for anti-people purposes, the Presidency is challenged to name and point to the particular project executed by Governor Bello as well as make the terms and payment agreements public for Nigerians to see.

“If the Buhari Presidency means well for Kogi State, it should reword its request and put the interest of the masses ahead of all selfish and parochial political considerations, particularly, as the state approaches a critical election in which the people have made up their minds to vote out Governor Yahaya Bello.

The PDP, therefore, urged President Buhari to resist attempts by his handlers and Governor Bello to drag his Presidency into this shameful attempt to steal fund that ought to go to the suffering masses in Kogi State.

Furthermore, the PDP charged the National Assembly to be on the side of the people by applying its legislative instruments to commence an immediate investigation into the alleged squandering of over N700 billion Kogi State funds by the Bello administration in the last four years.

The PDP also called on the people of Kogi State as well as financial watch organizations to be at alert, monitor all disbursement of funds to Kogi State and ensure that Governor Bello and the APC do not achieve their aim of diverting the N10.069 billion for their selfish purposes.