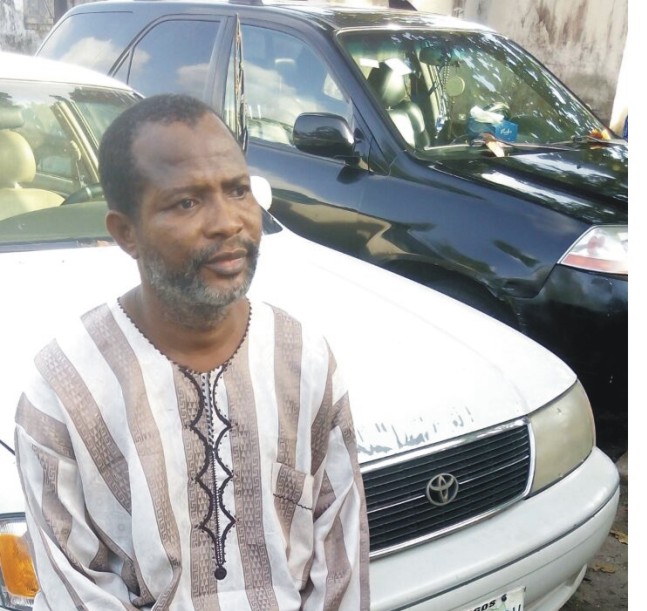 THE leader of a serial robbery gang who specialised in stealing cars from where they are parked have been arrested by men of the Anti-Robbery Squad (SARS) of the Zone 2 Command, Onikan, Lagos.

The suspect, a 46-year old Adeniyi Oluwafemi, was said to have participated in series of car theft and sale within the Lagos metropolis.

It was gathered that the suspect had stolen a Toyota Avalon belonging to IRABIZ Nigeria Limited from the driver, one Mr Austin Ahiante where it was parked around Ajuwon Area of Akute in Ogun state around 7: 30pm on the 23rd February, 2016.

The driver of the car told National Daily that he uses the vehicle for hire but parked it where he had gone to drop a passenger. Before he could come out from where he helped the passenger to drop his luggage, an unknown person removed the car even when he had the car key with him.

As a result, he reported the theft at Ajuwon police station, Lagos.

it was learnt that operatives of the Anti-Robbery Squad attached to Zone 2, Command, Onikan recovered the vehicle at the point of sale through a tip off on the 17th April, 2016 from a gang of five armed robbers who specialized in car theft. In the process, the car dealer was nabbed while others are still at large.

ALSO SEE: AIG appeals for support to police in fight against crime

The stolen car, a white Toyota Avalon with registration number: Lagos KRD 264 DV was recovered from them and taken to the Zone 2 Headquarters.

After a diligent police investigation, the suspect Adeniyi was charged to the Magistrate Court sitting at Tinubu on a two count charge of conspiracy to commit felony and stealing an offence punishable under Section 409 of the Criminal Laws of Lagos state 2011. The count read: “That you Adeniyi Oluwafemi ‘m’ and others at large on the 3rd of March about 1930hrs at City Mall Tafawa Balewa Square, Lagos in the Lagos magisterial District did conspired with others at large to commit the offence.

Count two read: “That you Adeniyi Oluwafemi and others still at large on the same date, time and place in the aforementioned Magisterial District, did received one Toyota Avalon car valued sum of N1, 100, 000knowing fully that the vehicle is a stolen vehicle, property of one Osifo Geofrey “m” and thereby committed an offence and punishable under section 326 of the Criminal Law of Lagos state 2011.

The Magistrate, Mr Shonuga sitting in court 4 granted the suspect bail with N500, 000 with two sureties after he pleaded not guilty and adjourned the matter to the 18th May, 2016 for trial.