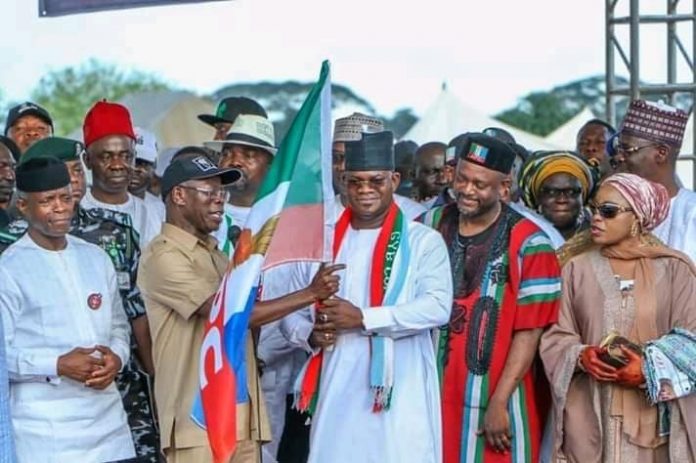 The Director-General of the Progressive Governors ’Forum (PGF), has told the National Chairman of the All Progressives Congress (APC), Comrade Adams Oshiomhole, to convene a National Executive Council (NEC) meeting of the party or resign.

Salihu Moh Lukman’s call followed the vote of no confidence in Adams Oshiomhole, party’s national chairman, by chairmen of 18 LGAs in Edo on Tuesday.

Besides numerous crises rocking the party across states, there has also been a power tussle between Oshiomhole and his successor, Governor Godwin Obaseki.

In a statement he personally signed and made available to reporters on Wednesday, Lukman said the National Working Committee (NWC) has hijacked the responsibilities of the apex decision-making organ of the party, NEC, which he said seemed to have been suspended.

In the statement he entitled ‘APC and our Inconceivable Organisational Challenges: Urgent Call to our Leaders,’ he noted that many of the crises facing the party in the states are those that NEC or National Caucus meeting of the party is designed to sort out.

“Side by side with the news of the vote of no confidence was also the discomforting report of the Federal High Court judgment in Abuja disqualifying Biobarakuma Degi-Eremienyo as our Deputy Governorship candidate for the November 16, 2019, Bayelsa election.

“While expecting that every necessary step will be taken to vacate the judgment, it is very depressing for every committed party member to be subjected to such ignominious reality, which only reminds us of our reckless conducts in states like Zamfara, Rivers, Bauchi and Adamawa, which chiefly gave away electoral victories to PDP.

“Instead of focusing on working to win elections, we are busy undermining ourselves. All these are ominous signs that we are about to re-enact the Zamfara, Rivers, Bauchi and Adamawa experiences in Bayelsa.

“It is Bayelsa today, Anambra, Edo, and Ondo are being set up for similar experiences. Somehow, unfortunately, the National Executive Council (NEC) of the party, which is the organ vested with the statutory responsibility of responding to all these challenges appear to be suspended.

“The last time it met was August 2018. In its place, the National Working Committee (NWC), which is an administrative organ with the responsibility of implementing decisions of NEC and other higher organs seems to have usurped the powers of NEC.”