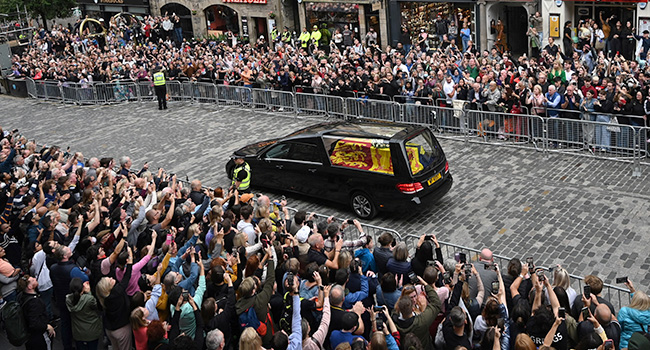 The public queue to attend Britain Queen Elizabeth II’s lying in state will be paused for at least six hours after reaching capacity, the government said.

Mourners have been warned by the Department for Digital, Culture, Media and Sport (DCMS) not to attempt to join the queue at Southwark Park in south-east London until around 4pm (1500 GMT) on Friday at the earliest.

The call was made as the official estimate for queuing time reached at least 14 hours, before a warning was also issued about long wait times at the “very busy’’ accessible queue.

However, there was some confusion on the ground as hundreds of people continued to file through the gate into the park, with one attendant saying they were yet to receive an order to bar entry.

The DCMS had tweeted: “Southwark Park has reached capacity; entry will be paused for at least 6 hours. We are sorry for any inconvenience.

“Please do not attempt to join the queue until it re-opens.’’

Tens of thousands of people have queued for many hours to see the monarch’s coffin raised on a catafalque in Westminster Hall since it officially opened on Wednesday.

However, with people waiting through the night to witness the lying in state, the queue had grown to almost five miles long by Friday morning.

The government had warned that Southwark Park had become “extremely busy’’ before making the decision to suspend entry.

But hundreds of mourners were witnessed continuing to enter the park in spite of the government’s online warning.

One queue attendant said that they were yet to receive any instructions to close the gate and stop any more people joining.

The DCMS also issued a warning that the time slots for Friday afternoon had filled up, adding: “Please consider this before making your way to the accessible queue.’’

The lying in state will be open 24 hours a day until closing at 6:30 am (0530 GMT) on Monday, ahead of the state funeral in Westminster Abbey.