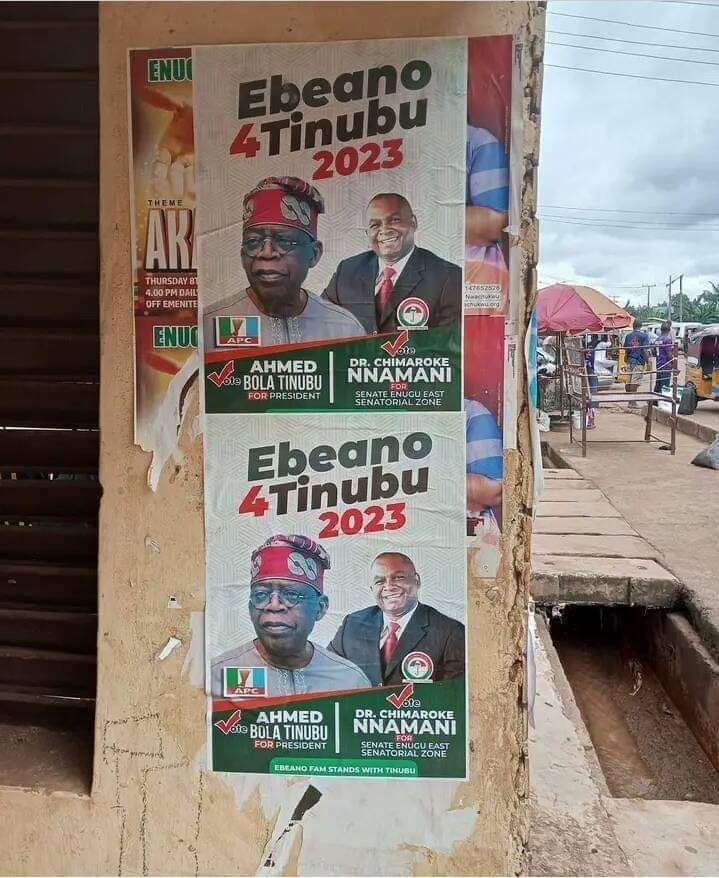 A campaign poster expressing the former governor of Enugu State and a member of the Peoples Democratic Party, Chimaroke Nnamani’s support for the presidential candidate of the All Progressives Congress, Bola Tinubu, has been generating reactions on the Internet.

Nnamani, also known as Ebeano, and PDP’s Enugu East Senatorial candidate in the forthcoming 2023 election had been included in the APC presidential campaign council list, which was released last Friday, and it raised eyebrows.

In latest development, the APC presidential campaign spokesperson, Festus Keyamo, posted on Twitter the poster of Ebeano declaring support for Tinubu and captioned it, “Talk of friendship across tribal divide!!.”

The tweet had garnered a wave of negative responses. Christian Ngwuta said, “He is a friend now, if he had supported Peter Obi he would have become an IPOB, I have never seen a hypocrite like you in my life. May I leave you to your conscience if you have any.”

Ojomah tweeted, “Please can someone ask the owner of this post if he believes in the party he represents, deep down the answer is NO.”

Lord Sleek said, ”You could have said across party divide, but cause everything is tribal division to you guys.”

Collins, in a bid to let Keyamo know that the poster means nothing said, “I can print posters of Sanwo-Olu and Atiku, caption it “Eko for Atiku”, paste them somewhere, take pix and post on Twitter. So this means nothing, Festus.”

Meanwhile, Nnamani has dismissed his critics, saying, “He Tinubu is my friend, brother and colleague. I have great respect for him, his political antecedents and strides in governance. And I am very proud and well pleased with him. Any body belly aching should go ….. himself.”

I“ll be a stepping stone for Igbo presidency – Atiku