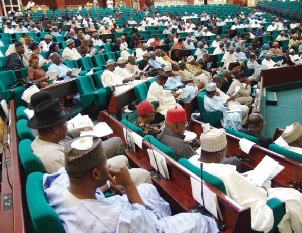 The House of Representatives has ordered its committee on Communication to within three weeks, investigate the Nigeria Communications Commission (NCC) over the existence of unregistered Subscriber Identification Module (SIM), even after the sum of N6.1 billion was appropriated by the National Assembly for it to carry out the exercise.

Also to be probed are all telecommunications providers in the country over their non-compliance with NCC’s directive to deactivate all unregistered SIM cards in use from their Networks, and the allegation of allied abuses of good corporate governance by the operators.

The lower parliament yesterday adopted a motion moved by Hon. Oluwole Oke as a matter of urgent public importance, seeking an investigation into the non-compliance with the directives to deactivate unregistered SIM, as well as other related abuses by telecom operators in the country.
According to him, NCC discovered in December 2014 that about 45 percent of registered SIM on the mobile network were invalid due to non-registration or improper registration.
According to the him, the figures reeled out by the NCC showed that out of the figures,18.6 million were MTN subscribers , 7.4 million belonging to Airtel, 2.33 million are Globacom subscribers and 9.46 million are on Etisalat network.

He argued that the operators appeared to have selectively complied with the directive of the regulator thereby compromising the cardinal objective for the introduction of the exercise, expressing particular concern over MTN which had the largest number of referred cases, but in a seeming corporate arrogance refused to act in line with the directive.
Speaking further, he argued that, “the assiduous efforts of our hard working security agents to tackle incessant and sustain cases of insurgents and kidnappers may be attributable to the non-deactivation of lines still being warehoused by the criminal having acquired them as pre-ordered”.

According to him, “this condition may worsen and prevent the achievement of the deadline to tackle insurgency and other forms of insecurity in Nigeria.
“MTN has not denied that the regulator had not variously served the telecommunication companies similar directives at the same time, while the others seemed to have complied, MTN blatantly refused, driven by pecuniary profit consideration at the expense of our collective security has ignored the directive leading to the imposition of fine.
“If the issue of fine imposition and the alleged decision of MTN to negotiate with NCC is made the primary concern and the link to our collective security, the parliament would be abdicating its primary responsibility”, the lawmaker stressed.

Contributing to the motion, Minority Leader, Honourable Leo Ogor informed the House on the need to investigate N6.1 billion budgeted for SIM registration through the NCC by the National Assembly.

Ogor said: “Let me appeal to the committee handling this investigation to be mindful of the billions of naira budgeted for the registration of SIM Cards as given to the NCC.
“I’m aware that this House in the 7th Assembly appropriated over N6 billion for the purpose of registering sim cards and the funds were released. The NCC should explain what it did with that money now that we are still having issues of non-registered subscribers.

“So let them go beyond the telecom providers and also look at the role of the regulator itself which claimed over N6.1billion for the purpose of generating a data base of subscribers.

When the motion was put to voice vote, it was passed by members and subsequently referred to House committee on Telecommunication to report back within three weeks.