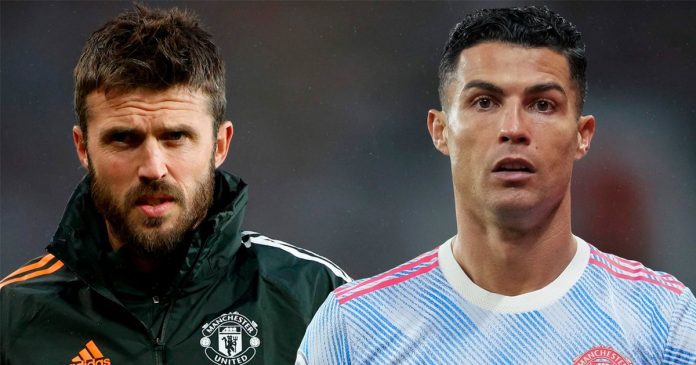 Manchester United on Sunday clashed with league leaders Chelsea at Stamford Bridge in their first Premier League game after the sack of Ole Gunnar Solskjaer.

It was however amazing to see United’s highest Cristiano Ronaldo starting from the bench after his 15 goals for United so far this season in all competitions.

United’s interim manager Michael Carrick has however opted to omit Ronaldo from starting eleven leaving many in awe.

While the likes of Marcus Rashford, Bruno Fernandes, Eric Bailly and Nemanja Matic were restored to starting lineup, Cristiano Ronaldo, Anthony Martial and Donny van de Beek returned to the bench, Harry Maguire also missed out of the starting eleven as a result of his suspension.

Notably, it is only the second time this season that Ronaldo has been named on the bench for a Premier League or Champions League match, the first occasion taking place last month for the 1-1 draw at home to Everton.

Meanwhile, Carrick was quick to explain the obvious change when he said: ‘A few tweaks and changes to freshen things up. Anthony [Martial] and Donny [van de Beek] too and Cristiano Ronaldo is your standout name [to be on the bench].

‘I have had a good chat with Cristiano and he was great.

‘It is a decision to pick a team, we don’t need anymore drama than that. Everyone who has come out of the team has been terrific around the place – including Cristiano – and have been supporting the boys.’

‘I think it’s the right call [to leave Cristiano Ronaldo on the bench]’, he told BBC Radio 5 Live.

‘You understand what Ronaldo’s about and the sort of player he is, but he’s not going to press, he’s going to play a bit-part role in the game and maybe score you a goal on the counter.

‘I’m sure the plan will be to keep it tight for 60/70 minutes and then introduce Ronaldo to the game to hope he can get that goal.’