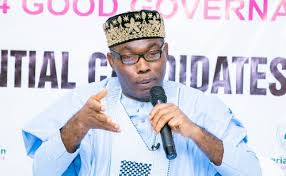 The presidential candidate of the Social Democratic Party (SDP), Prince Adewole Adebayo, has made an unusual and ‘giant’ promise to Nigerians, to pay out Nigeria’s N77 trillion debt incurred by the President Muhammadu Buhari administration of the All Progressives Congress (APC) in three years.  Adebayo in a media interaction, declared that he is not perturbed by the hanging N77 trillion debt to be inherited by the next president of the country after the 2023 general elections.

The  SDP presidential candidate stated that as the next president is inheriting the N77 trillion debt, there are enormous assets to be inherited as well as to pay off the debt. He said that he would create over 30 million jobs from the 220 million population from where tax would be paid to generate revenue for the payment of the debt in three budget cycles.

According to the SDP presidential candidate, “the cumulative debt of N77 trillion Naira would be paid off in three budget circles, while Nigerians would have the full benefit of good governance which would fully activate sections of the Nigerian constitution that deals on welfare.” He maintained that the 220 million population of Nigerian citizens remained an asset that can be harnessed by creating jobs with living wages that could be taxed to pay up the debts.

He added that conversion of the land assets to various agricultural production would also harvest more taxable revenue to boost and address critical needs of the economy.

“When you have a debt profile that is put at N77 trillion, you are looking at the death side, what about the asset side?

“I mean everything, all other things, solid minerals and all other assets. So, the debt is so small when compared to the assets that we have. So, what I will do is, looking at structure of our debt.

“If I push our revenue up by 32 %, we will be fine but the window of pushing our revenue up is about 300 percent. And if I push down the wastage and the corruption by three quarters, 75%, with some saving pockets here and there. And do some mop up. I think that Nigerians would not even remember that we have debt profile at all.

“We will retire the debts within three budgets, the debt will be insignificant and the people will get employment. “If I get 30 million jobs added to the workforce, the taxation on pay as you earn alone, will wipe this debt off.

“I don’t worry about that. It is not the load that kills, but how you carry it. “So, these debts represent a deficits of imagination, a deficit of creativity, a deficit of competence,” Adebayo had declared.