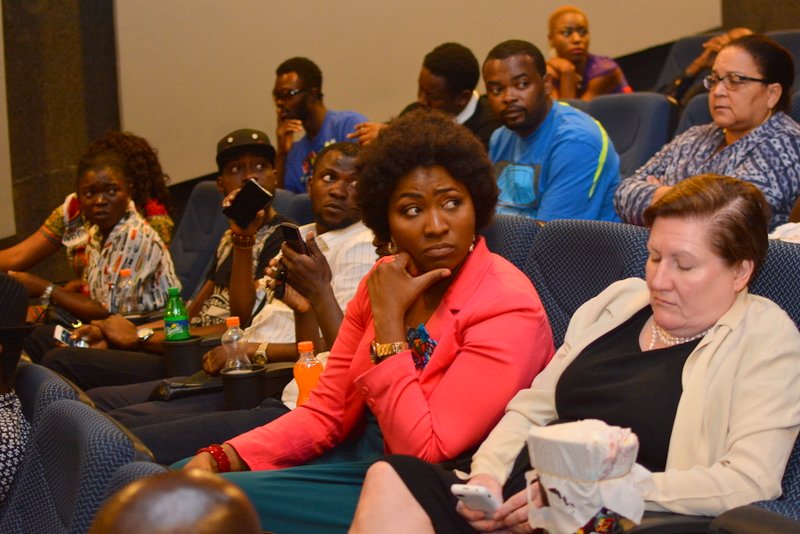 Share this on WhatsApp
Spread the love
By Ediale Kingsley
For absolutely free, I have now seen 93Days twice (yeah…you can hate me now…but I won’t stop now). Somehow, I think destiny draws me to this project. Yet I dont or can’t figure out at the moment the true purpose for this.
Why do I say? I have been a part of this job from preproduction to production, and to postproduction:
I was even part of the press conference hosted by the First Consultant Medical Center when they were reopening after the Ebola blow. I was in the hospital. I met the survivors.
However, while I slowly piece my bigger story on this project, here are the other sides of the movie:
On the second ticket. I said to myself, “common there must be something negative to talk about. Try hard, you will see some issues that are sort of a blunder or pending disaster”
I was able to draw these points out:
1. Onyeka Nwenu is in the movie. Small role but she acts herself (she featured via a clearly blasted TV in one of the film’s locations). For free. Unsolicitedly free, so she may eventually want to solicit a lawyer for her pay. Except of course she ignores. Would she?

2. Danny Glover in this movie looked like he was called out of retirement. Perhaps if he could wear the Liberian accent he would have sit comfortably in Sawyers character. I know he’s a great actor. Not even going to debate that. Yet he must have gotten his wish to work in Africa at the wrong time. He played the Senior Manager of First Consultant Medical Center, someone I met at the hospital after the Ebola saga. I can say, for sure, he wasn’t weak or sick. Despite these facts, whatever Mr. Danny got as pay for the flick, he would have equally earned as a speaker for same amount of work he put at the closing scene.
3. Sawyer’s family got to see how their brother was cremated. Though it was in a respectable way. Just hope they will understand. Just hope that won’t spark another war in the near future.
4. The Lagos Emergency Medical Vehicle Drivers who served as the drivers taking Ebola victims to the Yaba Medical Centers played themselves in the movie. Yep, you heard me right! These drivers that went about carrying the patients did play themselves. Just wonder if they signed any not-to-be-paid document . Else someday, one or more of them may decide to play a card that would be legal. The card? Asking for a fee for their roles in a commercial movie. Will that day come? Or is it a question of when?
5. Churches can serve as an awesome place for movie premiers. That we learnt with this one. 93Days was premierly hosted by House On The Rock Churcn at the exquisite Rock Cathedral Hall. You bet it served the purpose. You know churches are built for masses of people. You may just want to wonder what happens now. I will explain. Nollywood will boycott the expensive cinema spaces. That means dodging some good bills. From taxes to cinema distribution fees. That may either mar or bless this industry of filmmakers.
Imagine if Churches now double as Cinema centers. Remember, they are part of the structures that chased the old cinemas away. Well this may be the grand entry to chase the new cinemas away. Just saying. But you know Nigerians na.
Share this on WhatsApp
Related Topics:93 DaysEbola Virus DiseaseMovie
Up Next

9.3 Things you should do after seeing 93 days movie