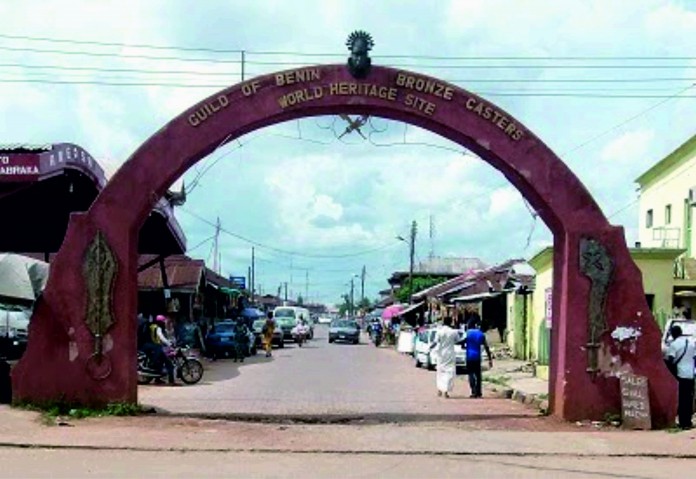 The Benin Kingdom / Empire is regarded as “one of the oldest and most highly developed states in the costal hinterlands of West Africa, dating perhaps to the eleventh century until it was annexed by the British Empire in 1897.” By the 15th century, Edo as a system of protected settlements expanded into a thriving city-state and, the 12th Oba Ewuare the Great (1440 – 1473) expanded the city-state to an Empire. Also, its administrative centre Ubinu began to be known as Benin City by the Portuguese.

By the seventeenth century, Europe was aware of a territory in Africa known as ‘Great Benin’. The area of the Kingdom was identified as ‘somewhat larger than Wales, with very wide influence extending West as far as Sierra-Leone, and South to the Congo River.’ Two of its colonies westward by the Atlantic Ocean were Lagos and Badagry, to about Port Novo. Hence, this stretch of the Atlantic Ocean became known, in maritime location, as the Bight of Benin.

A series of walls marked the incremental growth of Benin City from 850 A.D. to enclose the palace. Oba Ewuare commanded the building of Benin’s inner wall; an 11-kilometre-long (7 miles) earthen rampart girded by a moat 6 meters (20 feet) deep. This was excavated in the early 1960s by Graham Connah. Connah estimated that its construction if spread out over five dry seasons would have required a workforce of 1,000 laborers working ten hours a day, seven days a week. Oba Ewuare also added great thoroughfares and erected nine fortified gateways.

Excavations also uncovered a rural network of earthenware walls 6,000 to 13,000 kilometers (4,000 to 6,000 miles) long that would have taken an estimated 150 million man-hours to build and must have taken hundreds of years to build. These were apparently raised to mark out territories for towns and cities. Thirteen years after Oba Ewuare’s death tales of Benin’s splendor lured more Portuguese traders to Benin City gates.

Prior to the advent of the British colonial government in Nigeria, the Benin Empire was impressive in expanse and administrative clout.

The Benin Empire extended to Otun (the boundary between Oyo and Benin) in the north, the sea in the south, Asaba in the east, and Eko (Lagos) in the west. It included the Ekas, Ishans, Kukuruku, Ekitis, Owos, Itsekiris, Urhobos, Ijaws and Ondos. The Oba also had considerable power in the Ibo country on both sides of the river Niger (Ohinmwi) and at Bonny. Civil cases were tried by the chiefs in their own districts, but cases of treason and disputes between rival claimants to stools or succession, were brought to the Oba’s council in Benin City. The headquarters of the colonies or province of the old Benin Empire were; Agbor in Eka, Asaba in Iboland on this side of the river Niger, Arochukwu in Iboland, Irrua in Ishan, Agbede in Kukuruku, Akure in Ekiti, Ondo, Urele in Ikale, Warri (Owhere) in Itsekiri, Abraka (now Kwale) in the Sobo country and Eko (Lagos) on the sea.

JACOB U. EGHAREVBA 1960:82
Benin developed an advanced artistic culture especially in it famous artifacts of bronze, iron and ivory. These include bronze wall plaques and life-sized bronze heads depicting the Obas of Benin.

The first European travelers to reach Benin were Portuguese explorers in about 1485. A strong mercantile relationship developed with the Edo trading tropical products such as ivory, pepper and palm oil with the Portuguese for European goods such as manila and guns. In the early 16th century, the Oba sent an ambassador to Lisbon and the King of Portugal sent Christian missionaries to Benin City. Some residents of Benin City could still speak a pidgin Portuguese in the late 19th century.

The first English expedition to Benin was in 1553 and significant trading developed between England and Benin based on the export of ivory, palm oil and pepper. Visitors in the 16th and 17th centuries bought back to Europe tales of “the Great Benin,” a fabulous city of noble buildings ruled over by a powerful king. However, the Oba began to suspect Britain of larger colonial designs and ceased communications with the British until the Benin Expedition in 1896 97 when British troops captured, burned and looted Benin City which bought the Benin Empire to an end.