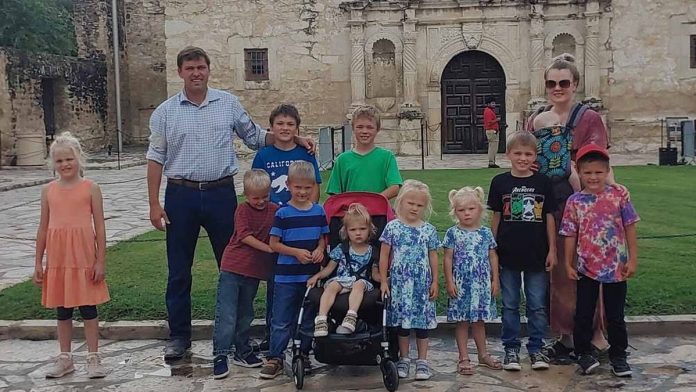 Stay-at-home mum Courtney Rogers, who married husband Chris in 2008, says she doesn’t care that her family are slammed by critics as a result of the large size of her family.

Meanwhile, the mother of eleven is now expecting her 12th child and has since damned critic out there with the intention to still slam her.

The 37-year-old Courtney who claims that she had “always wanted kids” hails from New Mexico in the US and interestingly, got married to her 33-year-old husband Chris who is also a Pastor in October, 2008 as a virgin and has never used contraception as she happily welcomes a new addition to her family yearly ever since her marriage.

And quite sensationally, the letter “C” is believed to be cherished by the lovely couple as the names of every member of the family begin with the letter “C”.

The proud couple save money by using cloth nappies and enjoying fresh fruit and meat as grown by themselves.

Further observation reveals that they also use eggs laid by their own hens.

It is believed that despite the fact that Courtney’s husband Chris works for a church and has several side jobs to support the family financially, strangers have not stopped accusing them of their inability to provide for their large family.

Speaking to the Sun, Courtney explained: People judge us at times. They don’t like large families or accuse us of not providing for them. It doesn’t really bother me because I know they’re strangers and don’t know us at all”

Courtney who enjoys a healthy Instagram followership where about 29,000 users have signed up to enjoy a peek into the family’s life has not been save from some vile comments being also attracted from trolls .

Remarkably, the 37-year-old mother of eleven has chosen to give her children formal education herself at their home which also accommodates a small farm that is being expanded by the family

Excitingly, the kids start their day at 8am when they have breakfast before they commence with their homeschooling by their mum.

And thereafter they have lunch after few hours before the babies have a nap while the older children enjoy “quiet time” before lessons resumes followed by farm chores, cleaning with their day ending with dinner before the kids retire to bed around “8pm or 8:30pm”

According to the wonderful mum of eleven: “At times its hard work keeping up with everyone’s schooling and all the cleaning and laundry is a chore. Our house can get quite crazy and loud”

Courtney speaking further explained that they would have stopped having babies after their 10th child as suggested by her husband who also came from a family of ten, but she still felt young and so they decided to go further perhaps because it was ‘cheaper by the dozen’

Painfully, the couple who have never used contraception for their babies have sadly suffered three miscarriages.

It is understood that the family spend between £220 and £260 weekly on shopping and they stay away from splashing out at Christmas.

And according to Courtney, they typically spend around £1,114 to £1,485 during festive season with the cost of gifts inclusive.

“Me and my hubby don’t usually exchange gifts. It’s all for the kids. I also start shopping several months before to spread the spending out. I can’t wait” she explained.