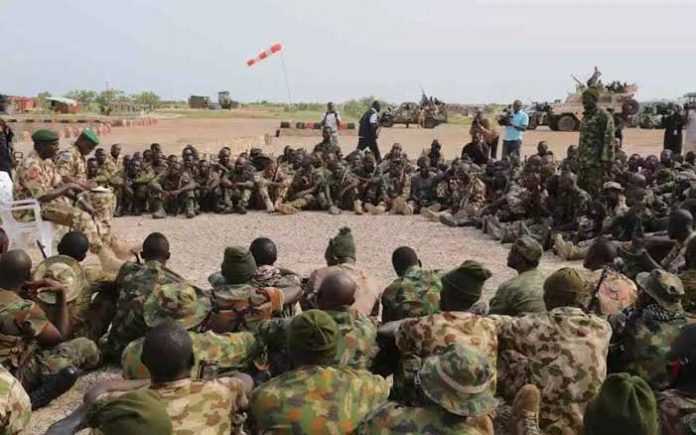 The Nigerian Army on Saturday began the trial, by a Court Martial, of an army major, two captains and 11 other soldiers accused of kidnapping, murder and desertion, among other offences.

Among the 11 soldiers docked were two staff sergeants and one sergeant.

Sarham said the General Court Martial was convened in compliance to Section 131 of the Armed Forces Act guiding professional conduct of the nation’s military.

“The offences for which the accused persons are being tried range from murder, attempted murder, kidnapping, desertion. Others are offences in relation to public and service property, disobedience to standing orders and conducts to the prejudice to service discipline.

“All the offences are punishable under the Armed Forces Act CAP A20 Law of the Federation of Nigeria 2004,” he said.

The GOC said the army has zero tolerance to indiscipline, adding that it would never shield any personnel, no matter how highly placed from the law.

He said the armed forces holds personnel in high esteem, and as such, would not put personnel on trial unless the matter was thoroughly investigated.

According to him, the trial was not only aimed at prosecuting the suspects but to discourage others from indulging in criminality.

“To this end, each accused person was thoroughly investigated to ensure that an innocent person is not wrongly tried and punished.

“The headquarters 6 division has painstakingly selected credible officers with in-depth knowledge and outstanding experience of military law and duties as members of the court martial to ensure fair hearing and justice.”

Sarham urged the seven-man court martial panel led by its President, Brig.-Gen. Bassey Etuk, to ensure that the accused persons are given fair trial.

The court martial is the second of its kind in the history of 6 division, while the accused, besides the major and two captains, also had eleven men, made up of two staff sergeants, one sergeant and others.

President of the general court martial, Brig.-Gen. Bassey Etuk, in his remarks, assured that he and six other members of the panel would do justice and they would not betray the confidence reposed in them.

Period of grace over for face mask defaulters in Lagos –...