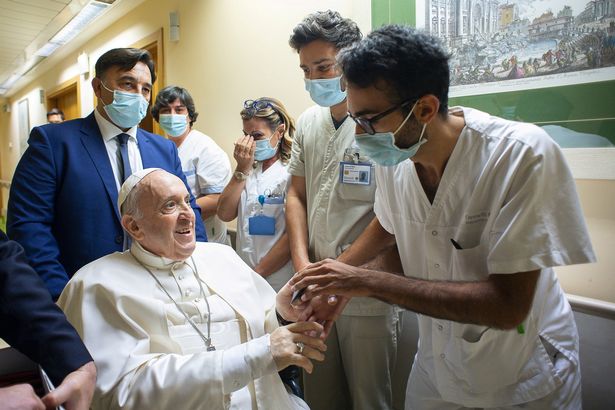 The above victories saw the Roman Catholic pontiff, Pope Francis who had been in the hospital where he underwent a surgery to have part of his colon removed on July 4 celebrating two important trophies being an Argentinian and Italian. What a moment for him.

It was indeed a great weekend for the pope as a life-long soccer fan, given that both the national squads of his native Argentina and his adoptive home country of Italy were victorious.

The Vatican said the pope “shared the joy” of both victories “with persons who are close to him” but did not say if he watched either of the matches.

However, the pope will have heard the street festivities that went on through the night in all of Rome, including the northern neighbourhood where the Gemelli is located.

The Vatican statement said that Pope Francis who is a lifelong fan of the San Lorenzo soccer team in his native Buenos Aires “underscored the significance of sports and its values and that sporting capacity of knowing how to accept any result, even defeat.”.

Meanwhile, the 84-year-old who had been meeting other fellow patients during his stay at the Gemelli hospital was however seen leaving hospital in Rome by car, 10 days after undergoing intestinal surgery.

The Vatican had earlier said on Monday that the 266th pope of the Roman Catholic church would stay in hospital a few days longer than the seven originally expected to “optimise his medical and rehabilitative therapy”.

Joyfully, Pope Francis made his first public appearance since his surgery on Sunday when he stood for 10 minutes while speaking from the balcony of his suite.

The pope stood while delivering the address on Sunday and thankfully appeared in overall good condition, although his voice was raspy.

It is gathered that the Pope has no commitments for the rest of the month apart from his Sunday blessing, though the Vatican is proceeding with plans for a papal trip to Slovakia and the Hungarian capital of Budapest in mid-September.

Scotland’s bishops on Monday announced that the pope will attend the United Nations Climate Change Conference (COP26) in Glasgow in November, health permitting.