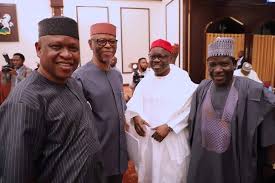 President Muhammadu Buhari on Tuesday evening presided over a meeting of the APC national caucus at the Presidential Villa, Abuja.

The meeting took place inside the new Banquet Hall at Aso Rock around 8 Tuesday night.

Akpabio recently defected from the PDP.

They, according to sources, were supposed to discuss preparation for the 2019 general elections.