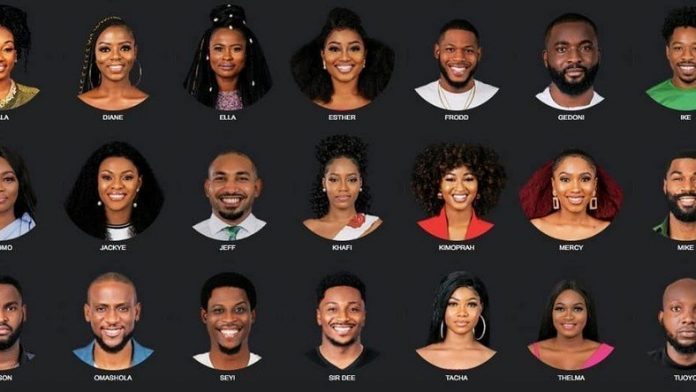 The BBNaija reality show is quite famous among youths as it seems like the straight ticket to celebrity life. For this reason, quite a large number of people turned up at the auditions for the show and only a few were picked.

Well, the chosen housemates often times look for ways to entertain viewers and that recently led to a ‘toss the ball’ game where they revealed things people do not know about them.

One of the housemates, Khafi, revealed that since she converted to Christianity from Islam, she decided to be celibate and she has been for eight years now. A curious housemate asked if she was still celibate seeing as she was very close to an ex-contestant, Gedoni. Khafi replied that she is still celibate. She also added that she used to be addicted to sex at a point. Obviously having more secrets to spill, Khafi disclosed that she used to be suicidal in her first year of university.

Another housemate, Tacha, revealed that she made her first million at the age of 22 and that she once dated a pastor’s son and had to hide just to visit him. The pretty lady added that her first sex lasted for half an hour and she did not enjoy it because she only gave in out of pressure. Tacha also disclosed that she once had feelings for two brothers and had a tough time picking one of them.

Cindy revealed that she had her first kiss at age 20 and she has only been with two men in her life.

Diane reiterated that she is still a virgin but she has had weird and crazy sexual fantasies.

Mike revealed that he had his first tattoo at age 16 and he was baptised last year.

Elozonam revealed that he had his first sexual experience at the age of 19 and he made sure to wear two condoms during the act. In another round, Elo added that he once had sexual intercourse with three women on the same day because he was going through a bad breakup. In addition, he disclosed that he sometimes struggles with his Christian faith.

Seyi revealed that he lost his chastity to an older woman and he once stabbed a classmate with a compass in primary school during a fit of rage. Seyi added that he once caught his girlfriend having sex with his friend and he revenged by having intercourse with her friends and cousin. He also added that he tried to commit suicide in SS1.

Ike revealed that he once threatened a debtor by posing with a gun at the person’s mother’s house.