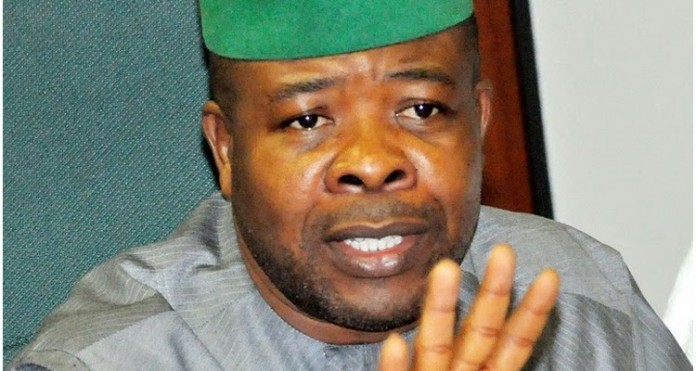 Palpable tension may be rerunning to Imo State as Emeka Ihedioha, governorship candidate of the Peoples Democratic Party (PDP) in the 2019 governorship election, on Monday returned to the Supreme Court to seek a review of the controversial judgment that brought Hope Uzodinma to office. The suit filed at the Supreme Court may be creating uncertainty in the Imo polity as Ihedioha team of lawyers try to establish Uzodinma’s status as APC candidate in Imo after the same Supreme Court had recognized Uche Nwosu as APC candidate but disqualified him for double candidacy of the Action Alliance (AA). Ihedioha’s counsels are also questioning the powers of the Supreme Court to allocate votes to candidates in elections. They further challenged the authenticity of the results from the 388 polling units in Imo State which was presented by a police officer in evidence who is not an INEC staff.

A certified-true-copy of the record of the appeal filed at the Supreme Court by Uzodinma and APC, issued by Nwana Ejike, Registrar of the Court of Appeal, Owerri, Imo State, from an earlier record compiled by Ibrahim Garba, Secretary of the Imo State Election Petition Tribunal, is being disclosed to the public.

Uzodinma, from pages 9 to 27 of his petition, drew a table of votes allocation which he claimed were obtained from the duplicate copies of Forms EC8A given to APC agents at the 388 polling units, the results of which were excluded in the overall result of the election.

From the tabulation compiled by Uzodinma in the controversial 388 polling units, there were 252,452 registered voters, and  213,695 voted for Uzodinma and APC, while 1,903 voted Ihedioha and PDP.

It has been observed that the Uzodinma table adopted by the Supreme court Judges does not indicate total number of accredited voters, number of invalid votes, if any, and the votes allocated to the remaining 68 candidates that contested the election.

The record shows that the duplicate Forms EC8A tendered by the PW54, Deputy Commissioner of Police (DCP), Rabiu Hussein, indicated that there were over six polling units that votes were recorded more than registered number of voters.

It was indicated that figure number 69 showing votes cast at Eziama/Okpala (Umualum Village Square, Eziama), total number of registered voters was 492, but Uzodinma’s table showed APC recorded 819 votes and PDP scored 7 votes; thus,  there were 334 more votes than the registered voters. Votes for other candidates were not included in the table.

On page 22 of the petition, 591 registered voters were recorded  in polling unit 282, but Uzodinma’s table shows APC had 586 votes, PDP 9 votes; that’s a total of 4 votes higher than the registered voters. Yet, votes of other candidates were not included.

More so, page 22 indicated that at the polling unit 285 (Obudi/Aro, Central Assembly Square, Unusable 11) registered voters were 449, but APC was allocated 780 votes and PDP 4 votes; that is a total of 335 votes higher than number of registered voters.

After the Supreme Court judges declared that votes from the 388 polling units were wrongly excluded from the votes of Uzodinma, the Supreme Court result recorded 950,952 votes, in excess of the 823,743 votes cast in the election, having 127,209 excess votes.

This is being challenged as allocation of votes to APC to ensure Uzodinma’s victory.