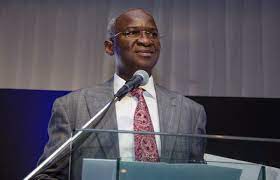 The Minister of Works and Housing, Babatunde Fashola SAN, at TheNiche Annual Lecture in Lagos on Thursday, with the theme – 2023 Elections and The Future of Nigeria’s Democracy – urged Nigerians to vote with understanding in the 2023 general elections.

Fashola, the Guest Speaker, highlighted several issues in politics, government and the constitution in providing guide to the people on decision making during the elections.

He said that people should consider “how can democracy make our lives better and make our country greater” in making decisions at the polls.

Fashola made a distinction between the arms of the government, as well as what constitutes the federal government, including the Federal Executive Council.

The Guest Speaker expressed concerns that most times lawmakers attribute government’s failure to the government, while they really mean the executive, saying that the federal government comprises of the legislature, executive and judiciary.

He made an incursion into the role of parliament in a democracy. He pointed out that it is not the job of the lawmaker to provide infrastructure but bring problems of the constituent to the legislature, perform oversight on the executive and pass budget law. “The lawmaker is there to raise concerns of the community problems and make laws,” he reiterated.

The minister, therefore, told the audience to vote with understanding of how the legislature works.

An elder statesman, Alhaji Tanko Yakasai, was Chairperson of the public lecture. He expressed his preference for the French model of Presidential and parliamentary government, saying it is cheaper and more suitable for Nigeria.