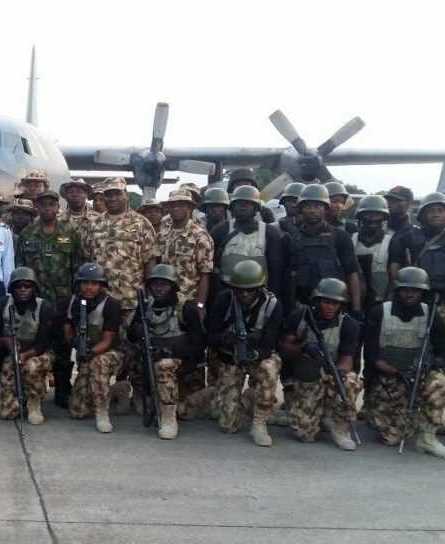 It was a moment of joy and ecstasy as 97 airmen and officers returned to the country from The Republic of Gambia after they successfully ousted the Gambian former leader, Yahya Jammeh from power.

The Commander of the troops, Air Commodore Tajudeen Yusuf, said the Airforce would have applied force if Jammeh hadn’t stepped down.

National Daily learnt that they were part of the 200 Nigerian Air Force (NAF) contingent deployed after Jammeh refused to cede power to his successor, Adama Barrow who won the 1st December, 2016 general elections.

The contingent, who arrived in a NAF 918 C-130 aircraft and two alpha jets, were said to have shown off their military strength by continually flying over the former President, Jammeh’s residence from their base in Senegal.

National Daily further gathered that as a result of different NAF air lifts and aircrafts flying over, coupled with other countries, the Gambian military had no option than to have downed their weapons for fear of vengeance, given the strength of their military power.

Receiving the contingent on behalf of the Chief of Air Staff (CAS), Air Marshal Sadique Abubakar, the Chief of Policy and Plans, Air Vice Marshal James Gbum, said the remaining personnel were left behind to ensure stability and reintegration of the Gambian military forces.

According to him, “The discipline and professional conduct you all maintained was highly commendable and worthy of mention. Your cooperation with sister services and other military forces of other ECOWAS countries is also commendable.

“We are glad that democratic order has been maintained in The Gambia and stability achieved through your efforts. You have proven to be good ambassadors of NAF and made Nigeria proud.

In a chat with National Daily, the leader of the contingent Commander Yusuf said, “We conducted the operation with deterrence and diplomacy. When we gained access to the state house, from what we saw, Jammeh was prepared for war.

“But for the Airpower that we showed, as we were the first country to show up at The Gambia, he would not have stepped down.

For now, we have won the battle but it’s left for the political leaders to win the peace and stabilise the country.”

It was learnt that the remaining troops would remain in the Gambia until stability is achieved and the ECOWAS leaders decide that all security forces of other nations stand down.

They were deployed about three weeks and they returned to the country about 6pm on Thursday evening.

Share this on WhatsApp
Related Topics:Nigerian Air Force (NAF)The Republic of GambiaYahya Jammeh
Up Next

Kaduna massacre: CAN, PFN call on President Buhari to resign