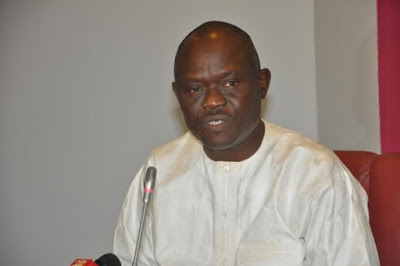 Children of late Gordon Koniepu Obua, former Chief Security Officer (CSO) to former President Goodluck Jonathan, have writing to President Muhammadu Buhari, expressing the anguish they are going through since the death of their father who was in the service of the State Security Service (SSS).

The children appealed for the President’s intervention to save them from going through hell here on earth for sins they never committed. They lamented the agony of their inability to pay school fess and the embarrassment that is causing them in their school.
The children decried the travails of their father before his death.
Details of their SOS appeal to President Buhari presented below:
“Special greetings to Your Excellency in the name of the most high God, the Alpha and Omega who see the beginning from the end.
“We are Miss Eunice Gordon Obua, Master Jonathan Gordon Obua and Master Goodluck Gordon Obua. We are 6years old and we are children of late Mr. Gordon Koniepu Obua, former Chief Security Officer (CSO) to former President Goodluck Jonathan, GCFR.
“We are told that we are the first set of triplets that were born in the Aso Rock Presidential Villa and that was why our birth made headlines and we were celebrated by many. It is however very sad that things are speedily changing from good to worst. We do not pray for other innocent children to go through the hell we are presently going through in the midst of so much danger that we have been exposed to.
“As we write this Save our Soul Message, our lives are in great danger. Beside the danger we are now exposed to, our two term school fees have not been paid. We feel very sad each time we are told about the school fees in the presence of our friends and classmates. We also feel bad when other children are writing but we are not given exercise books and textbooks.
“With tears in our eyes we wish to inform you that we your children are presently homeless with our poor mother without any hope from anywhere and there is no way we can go to school today because of our homelessness.
“We decided to write you this letter through this medium-Facebook because we watched on television sometime last month October, 2017 when you received some little children who wrote letters that they wanted to visit you and you immediately sent for them in spite of your busy schedule and programmes.
“Our late father, Mr. Gordon Koniepu Obua, was arrested in 2015 by his office, the Department of State Services (DSS) and he was later released because of his health challenges. But all his properties and monies were seized in the process by the DSS. Our father was traumatized and he died on 13th April, 2017 at the National Hospital and was buried on 3rd June, 2017.
“As we write this passionate Save our Soul Message, we have been evicted from the DSS Quarters we were living with our poor mother and we are presently homeless here in Abuja without food to eat.
ALSO SEE: Keystone donates fully equipped sick bay to school
“Our uncles and aunties are equally making life miserable for us and our mother. They have been threatening our lives. They even claim that our late father has other children and wife but we only hear about our elder brother, Akio our father had before he married our mother and gave birth to us. Contrary to their claim and lies, no child or wife attended the burial of our father at Emeyal 2 Community in Ogbia Local Government Area of Bayelsa State. All the people that attended the burial saw that we were the only children that were there with our mother.
“During the burial, our uncles and aunties kept us outside, they never allowed us to enter our parents’ house. They almost killed us with our mummy and our mummy has written several letters to the SSS, the Police and the National Security Adviser (NSA) yet nothing has been done since then while we are living in perpetual fear. Life has become so miserable and almost hopeless and it is out of pains, sufferings and frustration that we have decided to write this letter which is almost our last hope.
“We do not know what transpired between the government and our late father who served this country for over 30 years that will make us innocent children to suffer this untold hardship and pains.
“It is our fervent prayer that Almighty God will use you Mr. President who is father of all Nigerians to save our lives before it is too.
“May God continue to grant you divine health, bless, guard, guide and protect you and every member of your lovely family.
“We are your little children, Miss Eunice Gordon Obua Goodluck Gordon Obua Jonathan Gordon Obua.”
PV: 0