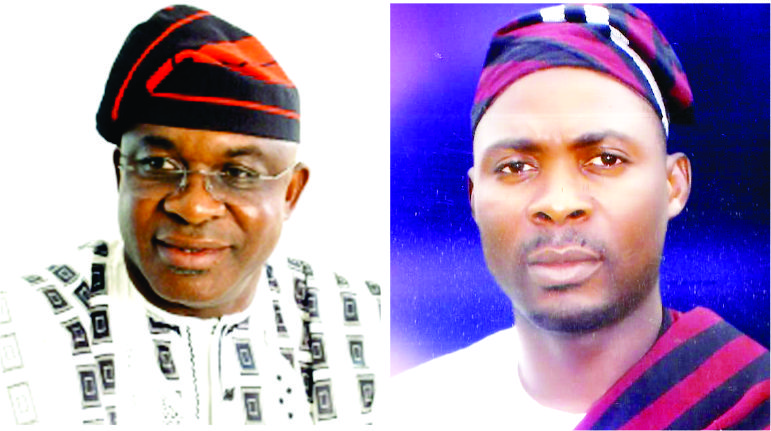 • As INEC fixes Feb. 13 for rerun poll in Benue South

ALHAJI Abubakar Usman Umar, Dan Maishannu, popularly called Young Alhaji, has began the lubrication of his political machine to ossify the political forte of former President of the Senate, David Bonaventure Alechenu Mark, towards the Saturday, February 13, 2016, rerun election in Benue South Senatorial District which was announced by the Independent National Electoral Commission (INEC), at the weekend.
Young Alhaji, who is widely considered a determinant factor in the re-ordered Benue South Senatorial District election, is known to have developed high reputation in his relations with the grassroots population in Idoma nation. He was revealed to be under intense pressure from the national leadership of the All Progressives Congress (APC), after the Appeal Court annulled Mark’s election in November 2015, to assist the party to defeat David Mark in the election. The Peoples Democratic Party (PDP) also approached Young Alhaji for support and to work with the party in the election.
After wide consultations, Young Alhaji pitched his tent with Mark in the interest of the Idoma nation which widely considered to be under threat of servitude to be dominated by external forces in the state.
National Daily investigation earlier revealed that the re-ordered senatorial election in Benue South is a litmus test for Young Alhaji to demonstrate that he is a true political leader of his people in Idoma nation because of his massive grassroots support and follower-ship. Alhaji Abubakar Usman, from Ogbadibo Local Government Area, Benue State, was disclosed to be set to formally launch the electioneering campaign for Mark on a date to be decided this week, thought with the consent of Mark.
Meanwhile, former President of the Senate, David Alechenu Bonaventure Mark, is set to launch the campaign for his re-election into the National Assembly after the long wait on the INEC which eventually fixed Saturday, February 13, for the rerun election in Benue South Senatorial District.
The rerun election in Benue South has been described by many stakeholders as a litmus test for Mark who will be contesting the first election as a member of the opposition political party, particularly, against two dominant political actors in Benue State, Senator George Akume and Senator Barnabas Gemade, both of the ruling All Progressives Congress (APC) and prominent leaders in Tiv nation. The two APC senators are not directly contesting the election with Mark but they have been in contention with the former Senate President over the control of Benue State. Mark is widely upheld to be dedicated to the promotion and protection of the interests of Idoma nation in Benue State since the contemporary democratic regime.
Apparently, many stakeholders in Benue South perceive the rerun election as battle for the soul of Idoma nation, including the battle to resist external domination of the Idoma nation.
National Daily investigation revealed that the February rerun election is symbolic for marking a glorious political career for the former Senate President who is expected to quit the stage in 2019 for younger leaders. Idoma people are not prepared to see disgraced out of partisan politics. Mark has taken the centre stage of Idoma politics since 1999 beside his military exploits in the 1980s. Popular expectations are that Young Alhaji would be made the successor of Mark in 2019. Apparently, Young Alhaji may be fighting assiduously in the contest to assert his leadership prowess and convince his people that he has the capacity to step into Mark’s shoes in protecting the interests of the Idoma nation.
The PDP is also considering Young Alhaji to succeed Mark in 2019. PDP leaders consider his close affiliation to the youths, his charismatic leadership appeals and humanitarian commitment to the poor in Idoma nation as political assets that cannot be ignored. In the political calculus of Benue South, Young Alhaji has high political capital in Idoma nation that can make a difference in the election.
Daniel Onjeh, the APC candidate, may be relying on the political influence of Akume, Gemade, Governor Samuel Ortom and the federal might in the election.
Available data shows that Benue South Senatorial District is comprised of nine local government areas, 102 Registration Areas, 1,016 Polling Units and a total of 1,174 Voting Points.
INEC, in a statement at the weekend, indicated that it will deploy 4, 931 staff to conduct the election, who will include: 102 Supervising Presiding Officers; 1,016 Presiding Officers; and 3,522 Assistant Presiding Officers (I, II, III), as well as 1,174 Assistant Presiding Officers (VP); and 235 Reserve Assistant Presiding Officers.