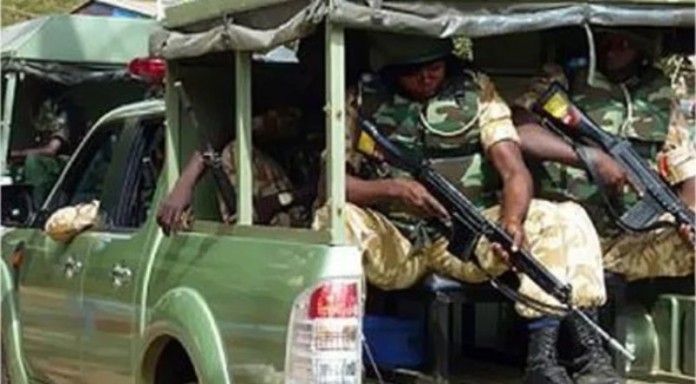 Reports indicated that while the men of the JTF engaged the gang of militants in a gun battle, three of the gang members were said to be severely injured and escaped with bullet wounds. It was also indicated that one of the soldiers was wounded during the exchange of fire.

Investigation revealed that rampaging pipeline vandals had, in the last three weeks, wreaked havoc in many of the oil producing communities within the Warri metropolis as they allegedly destroyed oil facilities worth over  N2 billion.

Further investigation revealed that the superior fire power of the JTF forced the militants to jettison their ill-fated mission.

The suspected pipeline vandals reportedly on a mission to compound the woes of Nigerians, following the blown-up gas pipeline few months ago, were said to have opened fire on the military on a location along the creek while they were on patrol.

But the JTF spokesman, Col. Isa Ado, who confirmed the incident, said no soldier was injured, disclosing that men of the JTF were in a hot chase of the militant gang and injured three of the gang.

He said that the military men were attacked in a location near Odidi, Warri-South Local Government Area of the state where the JTF engaged a gang of suspected pipeline vandals.

“It happened in the early hour on Tuesday the suspect came to our location at about 12 am and opened fire on our men, but our soldiers were able to repel them and got three of them injured who escaped withbullet wounds“ the JTF spokesman added.