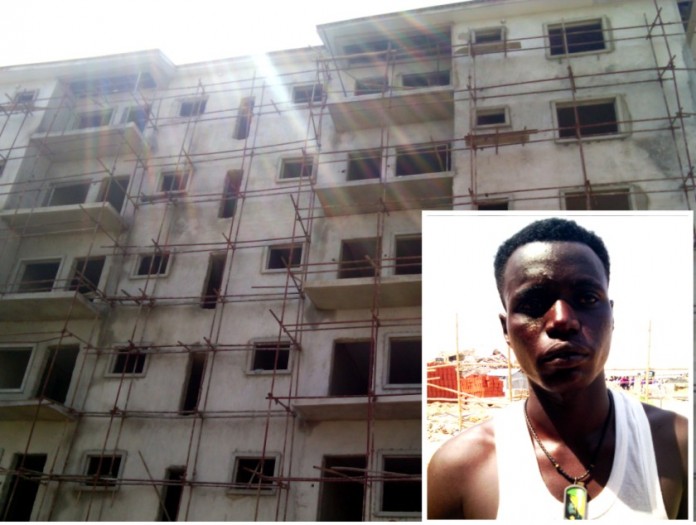 ATTHOM Abba, a 22-year-old bricklayer, would have died in the collapsed five-storey building at Ikate Elegushi, Chisco Bus Stop, Lekki Phase II last week but for providence.
He was in the building until 12am on the fateful night when he decided to respond to his inner mind; and despite entreaties by his late brother, Abba Alli, to pass the night, he left the building.

Before it was dawn, he received a call informing him that few hours after he left, the building where he has been working for the past three months collapsed. His brother, Abba Alli, who had encouraged him to pass the night and another bosom friend, Abdullahi Goma died in the accident.

Thirty-four bodies including that of a security guard at the site identified as Abba Alli, were recovered. Some of the dead were: Abba Alli – security, Mustapha, Yakubu, Yusuf, John, Ado, Ibrahim, Buhari, Johnson, Yohanna, Mariam – a female with four children – who were also identified as Yakubu, John, Illayasu and Yohanna.

Another security man identified as Isaac Atete said the building came down at once when he went to open the gate for the vehicle that was bringing materials.

About 50 people were in the building; most of them which were Hausa, Yoruba, Igbo, Beninose and Togolese. Most of them stay here because they are not paid what they are owed by Lekki Gardens.

“I cannot tell you lie; they are not using good materials. We have good irons in Nigeria but they are not buying good ones. This is the fault of the contractors. They pay bricklayer N3, 000 while they pay labour N1, 500,” he said, blaming Lagos state government for allowing the building to be erected.

However, last Friday, the Lagos State Government dragged the Managing Director of Lekki Gardens, Richard Nyong, and a contractor handling the collapsed storey building before an Ebute-Meta Magistrate Court in handcuffs.

Nyong and the contractor were in court following the collapse of the five storey building that led to the death of 35 people on Tuesday.

At the moment, although no categorical statement has been made by the government or the management of Lekki Gardens as the possible reason for the collapse of the building.

An Engineer who spoke to National Daily at the site of the collapsed building but preferred not to be named said they used sub-standard materials to build coupled with the fact that the place was sand-filled and the builders failed to observe the mandatory building regulations on a sand-filled area before erecting their building.

She blamed Lekki Gardens Engineers who are always in the habit of giving contract to bricklayers and carpenters who claimed to be engineers.

She said, “The problem we have is that everybody is looking for what to eat. The moment one contractor picks the job, he gives to another person, the money keeps on reducing and that affects the strength of the job.”

According to her, the Lagos state government and the Engineering department came to seal up the one of the buildings around the collapsed one.

“Because the system in the country is not working, they were bribed and allowed them to put up two additional floors. When you go into some of the buildings, about three or four have structural cracks just like the one that collapsed. To correct that, they have decided to do underpinning (another pillar). As an Engineer, I am not sure the lives of people in those buildings are safe,” she said.

“How can you sand-fill a land and in less than 10 years, you are building on it? The ground would compact and as the heavy load is on it, the ground is going down. The least you can have is to leave the land for between 10-15years after sand-filling it. Then, the ground would have compacted and another sand will be put on top of it before construction work can commence. Instead of sand being added, you have a house on it. So, as the land is going down, the house is going down too because the weight on top is sinking and it crashed.”

She also blamed the Guild of Engineers and those so-called Architect that have taken over the work of Engineers as some responsible for the collapse of the building.

However, some family members of some deceased who are Moslems said they are trying to secure the release of the corpses of their family members to enable them bury them according to Islamic rites.

Reacting to what they were doing to release the corpses, the General Manager, Lagos State Emergency Management Agency (LASEMA) Michael Akindele said, “We need to respect Islamic rite. Necessary arrangements are on for proper documentations to release the bodies in line with Lagos state government and police regulations.

Atthom further added that he immediately called his brother but was shouting on phone that a pillar fell on his leg.

“I started asking him which side he was but couldn’t answer me again. It was only God that saved me otherwise I would have been dead now. So many people died in this building, so many Hausa boys.”