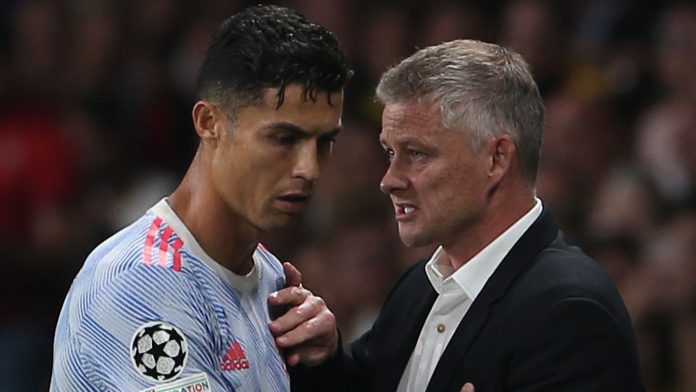 Cristiano Ronaldo and Manchester United have endured some embarrassing results recently as they have slipped to the sixth after turning out poor performances despite their initial smart start of the season.

The five-time Ballon d’Or Award winner had scored five times in his first six appearances following his return to Old Trafford but has failed to score in his last two outings for the Red Devils and was ineffective up front as United crashed to an abysmal 4-2 defeat at the King Power Stadium on Saturday.

Cristiano Ronaldo and his international compatriot Bruno Fernandes have since been singled out for ‘doing nothing’ towards United’s inability to effectively press the opposition which many felt caused the Old Trafford club major problems during the second-half by club’s legend Gary Neville on Monday.

Meanwhile, United’s boss Ole Gunnar Solskjaer speaking at a press conference on Tuesday ahead of the Red Devils Champions League clash with Atalanta has jumped at Ronaldo’s defence when the Norwegian tactician insisted he has no concerns over Ronaldo’s impact, insisting different players have different ‘roles and responsibilities’ in his side

When asked if Ronaldo’s perceived lack of running and pressing was causing a problem for the rest of his teammates, Solskjaer said: ‘We have got 11 players out there on the pitch.

We have different roles and responsibilities and we have a team out there that we really think is going to win that game.

‘We didn’t against Leicester so there is always going to be criticism.

‘And Cristiano is an absolute top player, we know what he can do for us, he is doing everything he can do to help the team.’