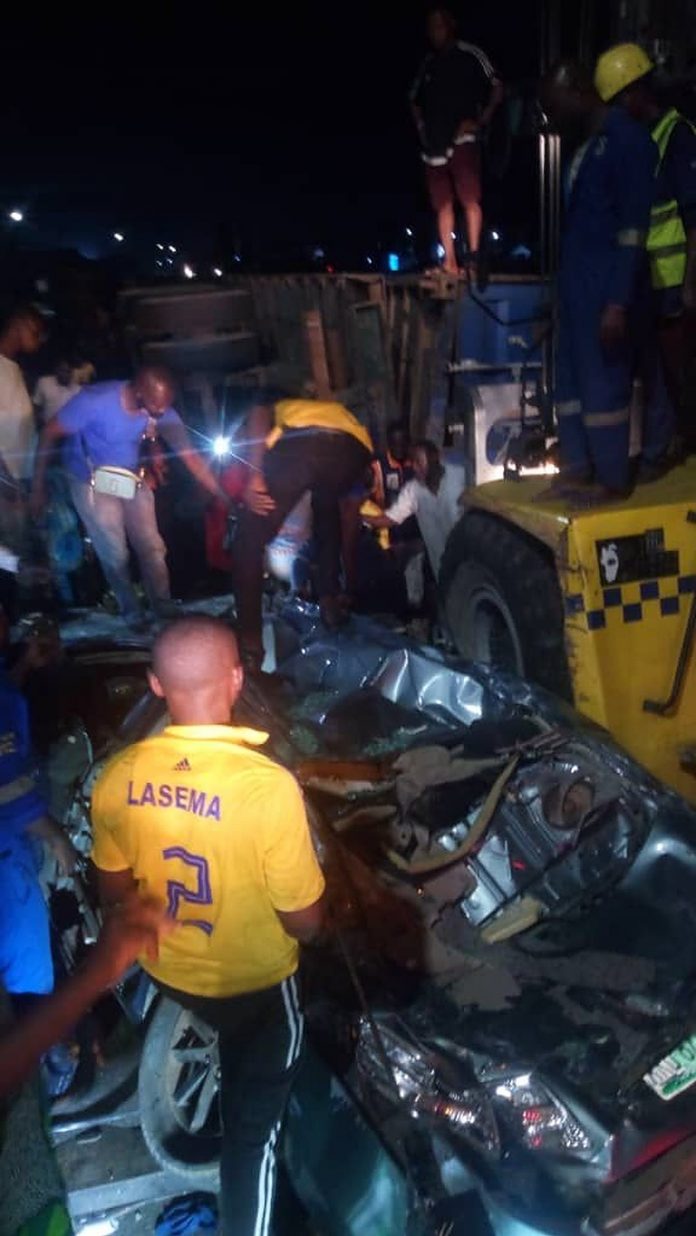 The Federal Road Safety Corps, Lagos Sector Command, says four people who were trapped by a fallen container have been rescued alive.

The Corps Commander, Mr Olusegun Ogungbemide, made the disclosure in a statement on Sunday in Lagos, signed by the Route Commander, FRSC Public Education Officer, Mrs Olabisi Sonusi.

The accident occurred around 6:38 p.m. at the Abati Barracks, Funsho Williams Avenue, Ojuelegba.

It involved a 40ft-containerised truck that fell on a Toyota Camry with registration number KRD 822 FZ.

Ogungbemide said that the crash left all the occupants of the car trapped under the fallen truck.

“The four occupants trapped in the car have been rescued alive. They are being attended to by LASAMBUS.

“The recovery was carried out by the Lagos State Emergency Management Agency (LASEMA) forklift with the support of response teams of the FRSC, Nigerian Army, Nigeria Police and the Lagos State Traffic Management Authority (LASTMA),” Ogungbemide said.

He warned owners of articulated vehicles, not maintaining minimum safety standards, to keep such vehicles off the road for the sake of innocent motoring public or face the wrath of the law.

He reaffirmed that the crash would have been more devastating if not for the fact that the container was properly twist locked.

He commended all the rescue agencies for their swift response that assisted in rescuing the trapped victims alive.

The sector commander commended the Lagos State Government for providing state-of-the-art rescue equipment that made the operations seamless.

He, however, advised the motoring public to be more careful, especially as the nation enters the “ember months“ in which economic activities peak.

Ogungbemide pleaded with motorists to exercise patience and cooperate with the emergency teams.