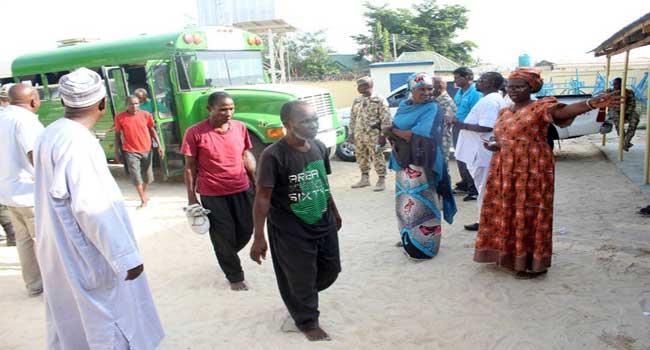 Share this on WhatsApp
Spread the love
After screening those arrested during the crackdown on Boko Haram insurgents, Nigeria Army said on Friday that it has handed over 760 suspected Boko Haram members to Borno State Government for reintegration into the society.
The Deputy Director, Army Public Relations, Theatre Command of Operation Lafiya Dole, Col. Onyema Nwachukwu, disclosed this in Maiduguri noting that the suspects were handed over to the government by the Coordinator of the Joint Intelligence Centre (JIC), Brig.-Gen. Abdulrahman Kuliya.
Nwachukwu explained that said the 760 suspects were handed over to the government at the Bulunkutu State Rehabilitation Centre, Maiduguri.
It was learnt that the suspects were arrested during the ongoing mop up of insurgents in the North East by troops of Operation Lafiya Dole.
ALSO SEE: $25bn NNPC contract scam: Kachikwu silent after meeting with Buhari
Col Nwachukwu further added that the suspects were cleared after interrogations and investigations by the JIC of the Theatre Command.
He added that the suspects were handed over to the state government by the Coordinator of the JIC, Brig Gen. Abdulrahman Kuliya.
“The JIC has cleared 760 suspects. The crackdown on Boko Haram terrorists is yielding positive results, culminating in significant reduction in terrorists’ activities in the North East.”
He appealed to members of the public to give useful, prompt information to security agents on suspicious activities in their communities to enable those still hiding be mopped up.
Share this on WhatsApp
Related Topics:Boko Haram insurgentsBorno State GovernmentNigerian Army
Up Next