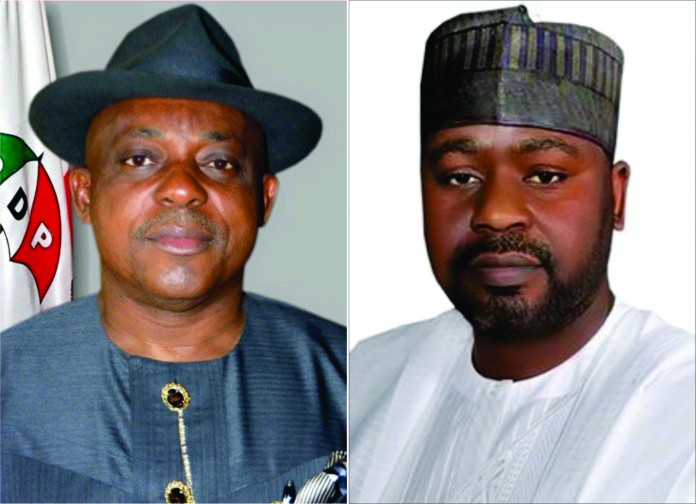 • Why Wakil, Ribadu lost to Sheriff

ALL is not well with the Peoples Democratic Party (PDP) as top gladiators‎ are said to be at daggers drawn for who controls the party. The tenure of Senator Ali Modu Sheriff as National Chairman of the party may also be upturned in the coming weeks according to dependable sources.

National Daily findings reveal that contrary to the belief ‎that Sheriff would take the PDP to the 2019 general elections, some Governors have concluded plans to remove him for his Deputy and former acting chairman, Uche Secondus to take over.

Though it was revealed that more Governors are already involved in this new plot, it was authoritatively gathered that Governor Nyesom Wike of Rivers State and his Delta State counterpart, Governor Ifeanyi Arthur ‎Okowa are presently at the forefront of the move.

ALSO SEE: The might, the odd of Modu Sheriff as PDP helmsman

Both governors, who were said to have backed Governor Olusegun Mimiko of Ondo State and Governor Ayo Fayose‎ of Ekiti State in imposing Sheriff as National Chairman have unveiled a second plot aimed at returning Secondus to the exalted position.

National Daily learnt that the states helmsmen are already working round the clock to have the party zone‎ the position of National Chairman to the South South as a prelude, to giving it to Secondus, presently Deputy to, Sheriff.

The reason for the move is based on the understanding that the PDP would field a Presidential candidate from the North in 2019, thereby making it inevitable for the chairman ‎to come from the South, preferably, the South South.

As a result, Sheriff’s stay may not exceed the PDP National Convention slated for March or April, as whoever emerges as chairman is expected to be in office for four years, clearly beyond the 2019 general elections.

Interestingly, it was further gathered that Wike and Okowa were among powerful forces who reportedly stopped the ambitions of Nuhu Ribadu, former chairman of the Economic and Financial Crimes Commission (EFCC) and Alhaji Mohammed Wakil, ex-Minister of State for Power to be the PDP National Chairman.

The forces, many of whom were indicted by Ribadu during his tenure as EFCC boss were said to have queried the managerial style and lack of political acumen on the part of the erstwhile anti-corruption czar, insisting that they would leave the party if Ribadu becomes the PDP chairman.

Wakil, on the other hand allegedly incurred the wrath of the governors and some other powerful elements in the party for consulting with former President Goodluck Jonathan after being tipped by a clique bent on controlling the PDP.

Meanwhile, several groups in the PDP have reportedly scheduled meetings for this week to take a stand on the surprise emergence of Sheriff as National Chairman. They are also to make their position known to the public after the parley.

National Daily learnt that some of the groups expected to meet include the Board of Trustees (BoT) led by its acting chairman, Senator Wakil Jubril, the PDP stakeholders forum, PDP Ministers forum, Renaissance Group, The Rescue Group, among others.