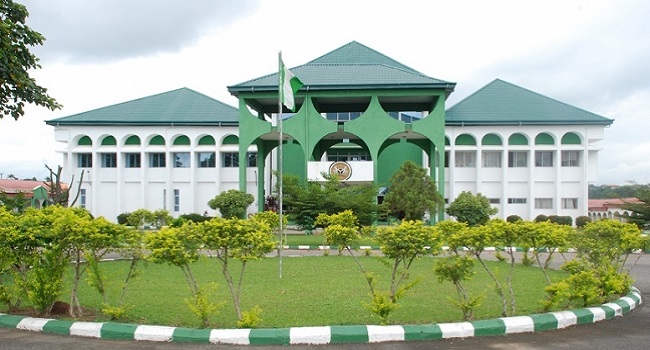 THE Speaker of the Abia House of Assembly, Honourable Martins Azubuike, in his one year anniversary speech, said the House has so far passed 11 bills into law, while five others were at various stages of legislative consideration.

Azubuike said this in Umuahia while briefing newsmen on the performance of the Sixth Assembly since its inauguration on June 11, 2015. The list of the laws included the Abia State Public Private and Partnership and Investment Promotion Law.

He said that the law was intended to create the enabling environment for private sector participation in driving economic growth in the state.

The house also passed the Abia State Marketing Agency Law, Abia State Abattoir Establishment and Regulation Law and amended the Abia Security Fund Law. He said the law would help the government to purchase crime-fighting equipment, especially trackers for tracking down suspected criminals in the state.

The speaker also gave a list of motions passed by the house during the one-year period, including the motion calling for the return of the Bank of Industry. He said that the bank was relocated out of the state in the wake of violent crimes, especially kidnapping.

He said that the ones found culpable would have zero allocation in the following year’s appropriation, except for cogent reasons, such as poor funding.

The speaker also expressed concern over what he described as the noncompliance with the resolutions of the house by some MDAs. He said that the house would soon assign the responsibility of enforcing compliance to one of its committees.

He said that the house would work hard to ensure financial discipline and strict implementation of the 2016 Appropriation by the executive arm.

According to him, government expenditure and projects not captured in the budget should be taken care of in the supplementary budget. Azubuike also spoke on the imperatives of financial autonomy for state houses of assembly.

He said that it would enable the state legislatures to function more effectively and independent of the executive arm. He expressed optimism that the process of amending the 1999 Constitution for financial autonomy, started by the last National Assembly (NASS), would be resumed by the present NASS.

The speaker expressed delight that the house had operated as one family under a robust and healthy relationship among the 24 members, in spite of their different political leanings.
National Daily reports that the house comprises 15 Peoples Democratic Party members and nine All Progressives Grand Alliance members.