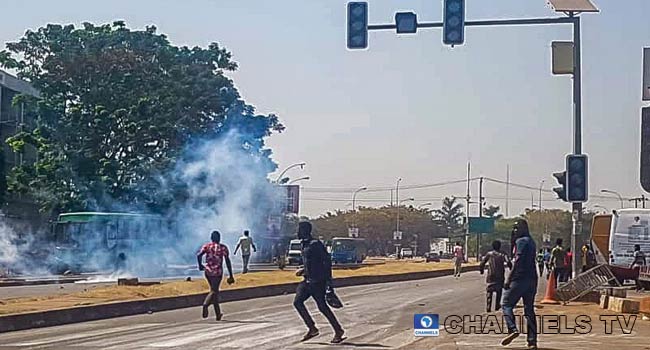 Nigerian Federal Capital Territory (FCT), Abuja, was thrown into pandemonium on Thursday when Shi’ite Muslims trooped out in their thousands to protest the continued detention of their leader, Sheikh Ibrahim El-Zakzaki, were confronted by the Police.

The Shi’ite Muslims who have religious leanings with the Islamic Movement of Nigeria (IMN) proscribed by the Nigerian government, had taken to the streets at Wuse, linking the Central Business District from Berger, in mass solidarity protest in commemoration of the death of their members during the their encounter with the Chief of Army Staff in Zaria, Kaduna State, which led to the military assault on their members by the Nigerian Army in December 2015.

The encounter subsequently led to the arrest and detention of their leader, El-Zakzaky, his wife and other members of the Islamic Movement of Nigeria.

It was gathered that the IMN members had commenced the protest at Wuse Market and were interrupted at Berger by the police who dispersed the crowd.

Report indicated that the protesting IMN members attempted to resist the police, and in their provocation, were throwing stones at the policemen.

Commercial activities were said to be halted and crippled for hours within the Wuse and Berger axis of Abuja; people were running for safety.

El-Zakzaky has been in the detention of the Nigerian government since 2015 while he is being prosecuted in court.  Several bails granted by the courts at different times were ignored by the administration of President Muhammadu Buhari, leading the All Progressives Congress (APC).