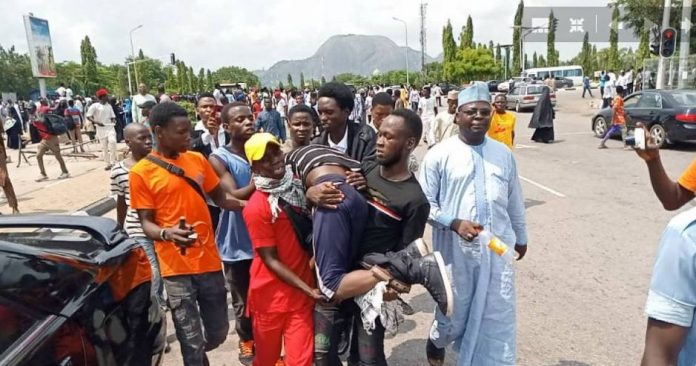 The Federal Capital Territory, Abuja, was on Tuesday thrown into mayhem when members of the Shiites, attempted to resist Police intervention over their attempt to invade the National Assembly in a mass protest.

National Daily learned that the Police opened fire on the protesters who were demanding the freedom of their leader, Sheikh Ibrahim El-Zakzaky, who is being detained by the Federal Government of Nigeria over the years.

National Daily also learned that the protesting Muslims reportedly inflicted injury on five police officers on duty at the entrance gate in their struggle to gain access to the National Assembly complex.

The Shi’ite protesters were said to have reinforced to overwhelm the Police and other security operatives on duty at the entrance gate; vandalizing over 50 vehicles.

National Daily learned that the security operatives had intervened to prevent the Shi’ite Muslims from jumping the fence into the National Assembly complex in their intention to invade the legislative chambers. Anti-riot policemen, however, repelled the protesters who were said to be few meters from the chambers, shooting into the air.

National Daily also learned that two protesters were reportedly shot dead, and some unidentifiable other injured. The mayhem was said to have obstructed legislative sessions on Tuesday while the Police battled to restorer normalcy.