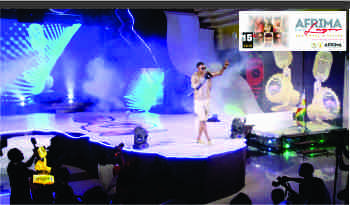 The Change
Former Governor of Lagos State, Asiwaju Bola Tinubu, was honored as The Pillar of Arts and Culture in Africa for social change at the 2015 All Africa Music Awards, AFRIMA on Sunday night of November 15 at Eko Hotel and Suites, Lagos, Nigeria.
The 23.9karat gold-plated AFRIMA trophy was presented to Senator Tinubu by Ambassador (Dr) Wale Maiyegun, Director of Social Affairs, African Union on behalf of the African Union Commission and the International Committee of AFRIMA.
The former governor, who expressed his appreciation to the African Union Commission for the honor, said AFRIMA has shown that there are assets of cultural variables that can be harnessed and appreciated in the African diversity. And that AFRIMA has demonstrated how Africa talents can be brought together to promote peace, wealth and prosperity in the country. He then called on the audience to stand on their feet and observe a minute silence for the victims of Paris disaster.
Giving his inspiring acceptance speech, Tinubu highlighted the benefits of a united Africa through arts, culture and entertainment. “It is with very humble respect that I accept this honour on behalf of my country. It’s a gift for all the talents in Africa. Tonight is a night of culture, a night of Africa.
It is a night of talent, a night that shows that we all belong to one single humanity. We had the situation some years back where artistes were not rewarded, but tonight, we are demonstrating to the rest of the world that culture, talent and artistry are unifiers. The unity of Africa is demonstrated here tonight.”
“This is a great opportunity and demonstration that the young ones, the youth across Africa are our future and you can do more to unite us with culture around the world. We can walk out of poverty. We can defeat and break the shackles of ignorance and disease by recognizing and promoting our talents. Each time you turn on the television and open your heart to the need of our youths, you will see the economic opportunity of these talented youths blossoming. In the last five years, the contributions of the youth and culture increased tremendously. The contributions from our artists are phenomenal now.”
“I believe you believe in what I believe. You share my values for African renaissance. It is not only the faces of shrinking ugly children infested by famine that is the face of Africa. We’ve seen the faces of talents here. If we work hard and forge together, we can bring Africa back with pride, talent and culture. We believe that Africa will continue to be great and will take its pride of place across the world and its talents and culture will be promoted.” Tinubu told thousands of cross sections of guests.
The president and Executive Producer of AFRIMA, Mike Dada, stated that, ”AFRIMA 2015 is a great improvement when compared to last year in terms of participation from more African countries. AFRIMA is where you can find Africa’s top 300 artistes under one roof. Everyone is here! Thanks to the African Union Commission and our committed and selfless members of the production crew and the International Committee of AFRIMA. Again, congratulations to Asiwaju Tinubu for this honor and new responsibility on the continent.

The Winners
34 awards were handed out at AFRIMA 2015, with Cameroonian artistes and Tanzania artistes, Charlotte Dipanda and Diamond Platnumz, emerging the winner with three awards respectively.
Nigeria artiste came out smoking on the night with 1 award each to Olamide and Yemi Alade, who won the Best Male and Best Female artistes in West Africa respectively. Darey won the Best Male Inspirational Artiste, while Flavour is the Best Artiste in African Electro.
Kunle Ayo was the “Best Artist in African Jazz.” Kiss Daniel and Adekunle Gold won the Most Promising Act in Africa and Revelation of the Year respectively. Praiz was the Best Artiste in African RnB & Soul. Oris Aigbokhaevbolo was the Music/Entertainment Journalist of the Year in Africa. Ghana and Morocco went home with two awards each while South Africa went home with three awards.

The Aggrieved
Celebrated Tanzanian artiste, Ali Kiba, claims dirty tricks led to his loss at the just concluded Awards.
The Chekecha singer who was nominated for Best Male Artist East Africa, Artist Of The Year, Song of The Year and Male Artiste of The Year, did not win any of the four trophies.
Three of the awards were bagged by his counterpart Diamond Platnumz, who was nominated in the same categories and now Ali Kiba feels that he was cheated out of his victory.
Through a post on his Instagram account, Ali Kiba thanked his fans for coming out in large numbers to vote for him.
He went on to say that some people had gone to the extent of splashing out money to ensure that he does not win any award.

Share this on WhatsApp
Related Topics:AFRIMAmusicpolitics and journalism
Up Next

MY BITTER VERDICT TO THIS SUGAR BELLY SAGA