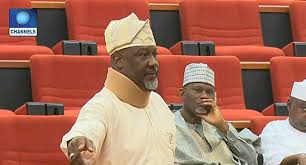 Melaye is facing trials in Kogi and Abuja for charges relating to gun-running, perjury, and suicide attempt respectively. He was hospitalised for about a month after allegedly bailing out of a police van during lawful custody.

The senator, however, resumed his legislative duty on May 30, though in neck braces and on a walking stick.

A copy of the AGF letter dated June 4, 2015, and referenced DPPA/INVEST./023/18 was sent to the court’s chief registrar on Monday, requesting for “a date for trial’.

“My lord, following his removal from the ICU, discharged from the National Hospital, Abuja and his subsequent resumption of duty at the National Assembly precisely on May 30 and 31, we humbly apply for a date for the prosecution to open its case in line with the ruling of this honourable court cited above and hearing notices served accordingly,” the letter read in part.

The AGF’s office is prosecuting Melaye on two counts of deliberately giving false information to the police to frame Mr Edward Onoja David, chief of staff to Kogi Gov. Yahaya Bello, in an alleged assassination attempt on his (Melaye’s) life.

Justice Olasunbo Goodluck on May 17adjourned indefinitely the case, until the senator would be discharged from the Intensive Care Unit of the National Hospital in Abuja, where he was admitted.