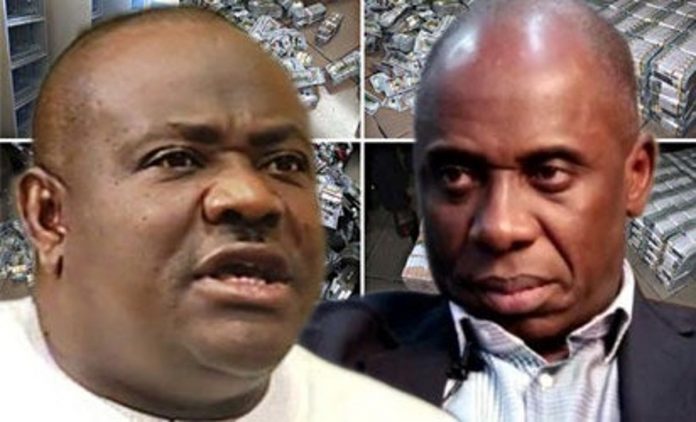 HURIWA’s National Coordinator, Comrade Emmanuel Onwubiko, in a statement, stressed that Wike of the Peoples Democratic Party is on a mission to witch-hunt and embarrass Amaechi because he is a member of the opposition in the state, the All Progressives Congress.

The group also said it was an irony how Wike has been hell-bent to humiliate Amaechi through a phantom probe of Amaechi’s eight-year term as Rivers governor but the same Wike has allegedly been shielding the 2023 PDP governorship candidate in Rivers, Siminialayi Fubara, from being arrested by the Economic and Financial Crimes Commission despite that Fubara, the immediate past Accountant General of Rivers, and three other top state government officials, had been declared wanted by the anti-graft agency for alleged N117 billion fraud.

HURIWA frowned upon these double standards by Wike and called the governor to act in the interest of justice, fairness and equity and not to be moved by political animosity and hatred.

Recall that the Supreme Court dismissed an appeal filed by Amaechi, an ex-Minister of Transportation, seeking to stop his probe over an alleged N96 billion fraud but the nation’s Apex court categorically ruled that the Commission of Inquiry set up by the Rivers State’s governor Mr. Nyesom Wike has no power in law to make indictment because it has no prosecutorial powers.

The Commission of Inquiry hurriedly set up by Wike has an agenda to look into the lawfulness or otherwise of the alleged sale of Rivers State’s valuable assets, such as Omoku Gas Turbine, Afam Gas Turbine, Trans Amadi Gas Turbine, Eleme Gas Turbine, Olympia Hotel and the award of contract for the execution of the Mono Rail project.

HURIWA said the decision to drag Mr. Rotimi Chibuike Amaechi to the Rivers State High Court few hours after the Supreme Court’s verdict that stated that the board of Inquiry by Governor Nyesom Wike has no power to indict anybody and then Nyesom Wike said that Rivers State’s elders will decide if his Administration will sue Mr. Rotimi Amaechi the immediate past Rivers State Governor,  shows that the reason for this sham prosecution of the former Transportation Minister is just a show of shame and a misapplication of the judicial powers to achieve predetermined politically tainted end.