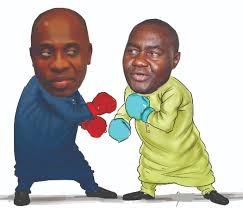 The rift between Minister of Transportation, Rotimi Amaechi and the senator representing Rivers South east, Magnus Abe has polarized the state chapter of the All Peoples’ Congress (APC) in Rivers state.

According to findings by National Daily, Friday’s congress held at the state’s party secretariat situated along Moscow road, Port Harcourt, was disrupted, and properties destroyed by aggrieved members said to be loyal to Senator Magnus Abe. The supporters were alleged to have carted away some materials needed for the congress.

The protesters alleged that the names of delegates for the exercise had been illegally compiled while there was an attempt to shut out supporters of Abe from the congress.

They said forms were not sold to Abe’s candidate, an allegation that Chris Finebone, spokesman of the party, denied.

Meanwhile, Governor Nyesome Wike of the state has accused security agencies of lacking professionalism, saying if “they could be could be negatively used during a party congress, Nigerians should expect electoral mischief, masterminded by security agencies in 2019.

“In an ordinary party congress, over a platoon of soldiers and more than 200 F-SARS personnel have been handed over to one man (referring to Amaechi).

“The operatives are to protect just one man, while other people are left without protection.”

On his part, Abe said it would not be reasonable to hold the exercise when a faction of the party has allegedly hijacked the process. He called on the leadership of the party to intervene.

“Up till now, nobody has heard anything from the officials that will conduct the congresses. None of the stakeholders has been called to any meeting. Those who have paid to get forms don’t know where to go or who to issue them form, but we hear some forms have been issued at Intels in Port Harcourt,” he said.

“We would like to appeal to the national secretariat of the party to do something about the situation. Forms have not been given to those who bought forms. They protested when they heard that forms were being distributed at Intels. I think know how you can conduct the exercise under such an atmosphere”

However, Finebone denied any irregularities in the sale of the delegate forms.

Addressing journalists in Port Harcourt, Finebone said the delay in the sale of forms to delegates was due to the absence of some national leaders.

APC is a bundle of confusion, says Onaiyekan

2019: What Buhari plans for PDP, pro-Saraki lawmakers,other enemies within APC