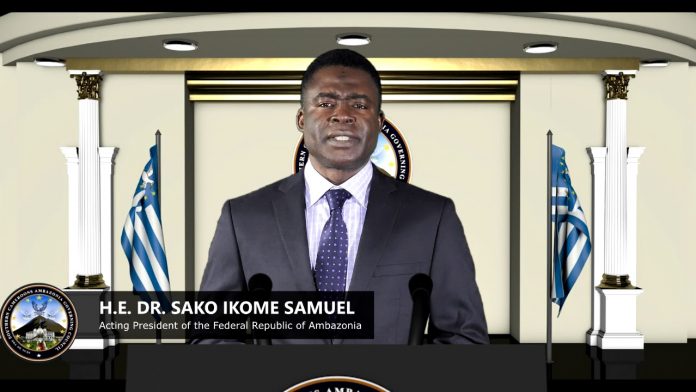 The leader of the interim government of the self-declared region of Ambazonia, Dr. Samuel Ikome Sako has distanced his people from the attacks in the Manga Community of Takum Local Government area of Taraba State leading to the death of 11 persons including the local Chief of the community.

Dr. Sako, who denounced the killings in a statement, accused the Cameroonian Government of perpetrating the attacks with plans to turn those communities against the Ambazonian people taking refuge in the Taraba State.

He then urged the Nigerian government to carry out an extensive investigation so as to know the real perpetrators before making any decision.

Last Wednesday, Mr Joseph Manga, an aide to Taraba State Governor, Mr. Darius Ishaku, had disclosed that some gunmen arrived at the community around 5:30 am in speedboats with sophisticated weapons, shooting at residents on-site and burning down buildings.

Manga, who is also the brother to the slain chief, later quoted as saying “For now, we do not know those that came to attack but news filtered in saying that they are Ambazonian separatist soldiers from the Republic of Cameroon.”

However, Dr. Sako denounced this as he said there is no Ambazonian under his command that has any reason to attack the people that have been so good and continue to be good to them.

“We believe the timing of this attack is another strategic move by the Yaounde regime of the Republic of Cameroon to discredit our cause to the international community. It is no coincidence that this atrocious attack occurred during the maiden visit of the United States Secretary of State of Foreign Affairs, Mr Antony Blinken to Nigeria.

“Their plan was to turn these communities against our people, maybe to get the Nigerian authorities and security forces on their side to annihilate our people. We did share this intelligence when I gave an interview to the Punch newspaper in September. That was almost two months ago. Unfortunately, the authorities did not take this seriously, probably not believing that any neighbouring country can go to that extent,” Sako stated.

The Ambazonian leader also disclosed that just a few weeks ago, there was a report that in Taraba State, the same Cameroonian security forces —in mufti— crossed the borders into the Nigerian side in search of the so-called separatists while they tried to arrest their refugees.

“That’s what they do. And that was the same that happened this time. They have no respect for the territorial sovereignty of Nigeria. The Cameroon Government, they don’t. They think they can get into Nigeria to do whatever they want. Remember, in 2018, they crossed into Nigeria and arrested our leaders.

“What do we have to gain in this act? To cross over and kill those including the Chief that is helping to host our people. How can we? Who gains in it? Except the person who wants us all killed and does not want us to enjoy the little hospitality that ensures the survival of more than 125,000 of our people in Nigeria.

He welcomed the step taken by Senator Emmanuel Bwacha, representing Taraba South, to report the attack to the Nigerian Senate where he called on the Nigerian government to do something as a matter of urgency to protect the Taraba community.