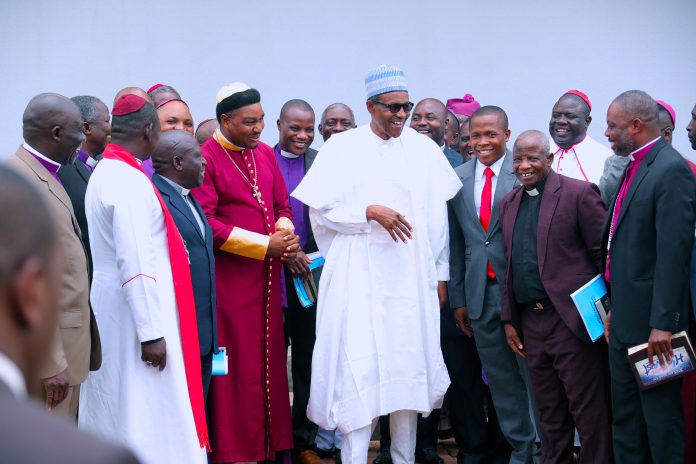 Share this on WhatsApp
Spread the love
A fresh insight into the recent endorsement of President Muhammadu Buhari by Arewa Pastors Non-Denominational Initiative for Peace in Nigeria (APPIN) has emerged.
Although the pilgrimage to the Presidency by APPIN led by Benue State-born Bishop John Richard Abu had sparked public outcry from Christendom in Nigeria, a pastor based in Kaduna has described the Bishop who led the delegation as a ‘pretender’.
Recall that the Christian Association of Nigeria, CAN, in the 19 Northern states and Abuja last week disowned a band of pastors, who visited president Muhammadu Buhari, saying they lack the mandate to speak on behalf of the pastors in the 19 Northern states.
In a statement by Rev. Emmanuel Olorunmagba of the Total Liberation Mission, Kaduna, Bishop Richard never resides anywhere near the North as being claimed, and that he only added the ‘Abu’ to his name to make it look as if he is from the North.
“He is based in Port Harcourt, where all the preparations for the visit to Aso Rock was hatched. His known address is in Odilli Road, Port Harcourt, Rivers State.”
Rev. Olorunmagba who alleged that the controversial Bishop was never a bishop, claimed ‘Bishop’ Richard was once arrested by the Economic and Financial Crimes Commission for obtaining money under false pretense. “So one can deduce the real purpose of their visit and why they hid under fake identity, falsely claiming to be from the North, representing pastors from the North, yet never residing in the North nor have any business in the North.”
“For clarity, the first Pentecostal Archbishop to be installed in the North is Archbishop Leonard Bature Kawas (known as Mabudi of Africa). And after the passing unto glory of Archbishop Benson Idahosa, the first Pentecostal Archbishop to be installed in Port Harcourt is Archbishop Amaga.
He said neither Archbishop Bature Kawas from the North nor Archbishop Amaga in Port Harcourt, two foremost Christian leaders ever knew him as a Bishop. And the Council of Bishops in Nigeria, Africa and the World is one of the most organized clergy groups.
He said since they claimed that they would expose pastors not supporting Buhari, he and other genuine pastors from the North are taking the lead by exposing their hidden evil works.
“And I want to make this clear that some of us that vowed to retire Buhari from politics are bold to publicly stand our ground against Buhari without any fear. So what do the so called “Arewa Pastors” want to expose to Buhari when we are already working against him publicly?”
Recall that a Bishop Sado had also alleged that Bishop Richard conscripted him by deception into following them on the visit to Aso Rock.