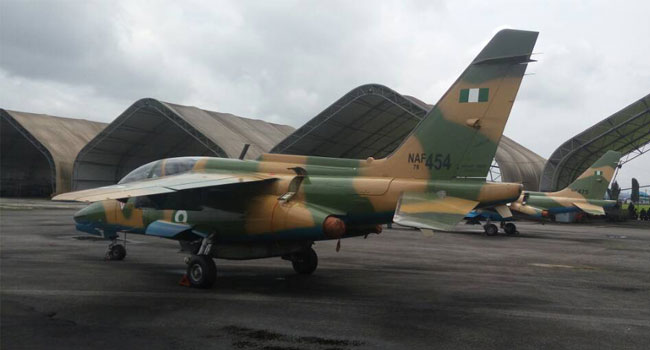 Several Boko Haram Terrorists (BHTs) have been neutralized and their logistics supplies destroyed in air strikes executed by the Air Task Force (ATF) of Operation LAFIYA DOLE at Mina along the Gulumba Gana-Kumshe Axis in the Northern part of Borno State.

In a statement released by the Coordinator, Defence Media Operations, Maj. Gen. John Enenche on Saturday in Abuja.

The feat, which has further destabilized the BHTs’ new leadership and curtailed their freedom of action, was achieved on 3rd July, 2020 as part of missions being executed under the subsidiary Operation LONG REACH II; sequel to Human Intelligence reports indicating that the BHT location had recently been reinforced with fighters and logistics supplies to provide resistance against nearby friendly ground troops’ positions.

According to Enenche, Nigerian Air Force (NAF) fighter jets detailed by the ATF to engage the location scored accurate hits in their bombing runs, neutralizing some of the BHTs and destroying some of their structures, including one of the terrorists’ logistics’ huts which was seen engulfed in flames.

” Some of the fighters who escaped the bomb attacks were mopped as the jets strafed their hiding positions”, he said.

The Chief of the Air Staff, Air Marshal Sadique Abubakar, commends the ATF for their dedication, dexterity and professionalism.

The Defence Headquarters equally urges them to intensify the air offensive against the terrorists and all other criminal elements threatening the peace and security of our beloved country.