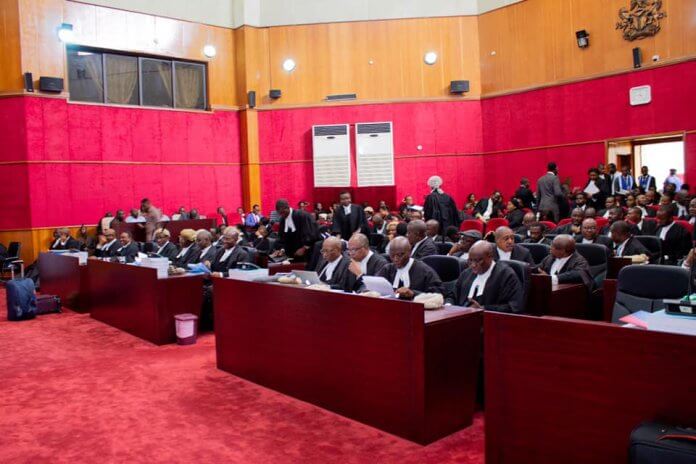 Peoples Democratic Party (PDP) presidential candidate Atiku Abubakar and the party yesterday called 13 witnesses in support of their petition challenging the outcome of the February 23 election.

Since the trial opened in the case on July 4, 19 witnesses have testified for the petitioners.

Most of the witnesses called yesterday gave conflicting evidence and could not substantiate the claims they made in their written deposition, under cross-examination.

One said he could not recall the day the presidential election was held, even though he claimed to have served as the petitioners’ agent during the election. Another said he was seeing,  for the first time,  a written statement attributed to him, which he earlier claimed to have signed.

Two of the witnesses,who claimed to have acted as INEC’s ad-hoc staff, said they transmitted election results electronically to INEC’s server, using secret codes allocated to them by the commission.

They, however, could not provide the code when asked to do so. When confronted with INEC’s guideline for the election, the witnesses could not point out where the guideline authorised them to transmit results electronically to a server.

Some of the witnesses said they disagreed with the figures of votes scored by the APC and the PDP at the election in Katsina State, as provided by Atiku and his party, indicating  that they lost the state to  Buhari and the APC.

Also, some of the witnesses,who claimed in their statements that the election was marred by irregularities, violence and intimidation, said they got the information from their agents who were at the polling units.

Each witness, upon being called to the witness box, is led by petitioners’ lawyer to identify his written statement, which he then proceeds to adopt as his evidence in the case, following which the witness is cross-examined by lawyers to the respondents – the Independent National Electoral Commission (INEC), President Muhammadu Buhari and the All Progressives Congress (APC).

The first witness, Tanko Bechi, said he served as PDP’s Collation Coordinator in Niger State and claimed in his statement that the election was marred by irregularities.

Upon cross-examination by INEC’s lawyer Yunus Usman (SAN), Bechi, who referred to himself as a lawyer, businessman and farmer, said the complaints contained in his written statement were those he received from the agents of his party on the field.

“I was not physically present in all the places where the incidents occurred,” the witness said.

Under cross-examination by Buhari’s lawyer, Wole Olanipekun (SAN), Bechi said he received the complaints both orally and in written format, and that those who gave him the complaints are still alive, but they cannot all come to the tribunal at the same time.

Under cross examination by APC’s lawyer, Lateef Fagbemi (SAN), Bechi’s attention was drawn to paragraph 11 of his statement, where he claimed to have received all the results of the election from his party’s agents who were on the field.

When reminded that he had claimed in his written statement that elections were disrupted in some places, the witness said he meant that he received all the results that were made available to him.

PDP’s Chairman in Katsina State, Salisu Yusuf Majigiri, said he acted as the party’s Collating Agent and Supervisor of all polling unit agents in the state.

Majigiri said by the results of the election as compiled by his party’s agents, the PDP won in Katsina State.

“From the collation that we did, we are the people who won the election. APC scored 872, 000 while the PDP 905,000. These figures are our own collation, not from the server.”

Asked for evidence of the results, he said he handed them to his party.

Maijigiri had, in his statement, claimed that in all the 34 local governments in his state, all trained ad-hoc staff of INEC were substituted with agents of the APC and its candidate.

When asked by Fagbemi to provide evidence of his claim, Majigiri said he did not have any.

Salisu Adamu Funtua, who said he acted as the petitioners’ Local Government Collation Agent in Katsina State,said in his written statement that he received the results of the election and reports of violence and irregularities form his party’s men at the polling units.

Under cross-examination by Usman, Funtua, however, admitted that INEC officials cancelled results in the polling units where his party complained about over-voting and non-use of the card reader for accreditation.

Fagbemi asked why he was still bitter about the out come of the election when he admitted that his complaints about over-voting and the non-use of card reader were addressed by INEC officials,who cancelled results from the affected poling units.

Fagbemi said : “If the two complaints in your deposition were addressed, why are you still here?”

Funtua replied: “They (his complaints) were addressed, but I am not happy because their votes were cancelled; they were denied their right to vote. Their votes did not count. That is why we are not happy.”

Funtua, who said he neither knew the number of votes scored by PDP and APC at the presidential election in his state nor the number of parties that participated in the election, disagreed with the result as presented by the petitioners.

Another of the petitioners’ witness, Musa Abdulsalam, also faulted the concession by his party that it lost Katsina State.

When asked by Olanipekun if he would be surprised that his party and candidate conceded defeat in Katsina State to the APC, the witness said “it can never happen”.

Abdulsalam, who claimed  to have acted as a Local Government Collation Agent for the PDP, said he did not know the number of parties that contested and the number of voters accredited for the election.

Aliyu Umar Usas, who claimed to have also acted as a Local Government Collation Agent, alleged that over voting took place in many polling units because voters were partially accredited.

Usas added: “When the card reader stopped working, they continued to vote, because the APC, INEC and security agents colluded to cheat my party.”

When asked to point out the portion of his written statement where the allegation was made, Usas said he forgot to include that aspect in his statement.

Umar Alhaji, who said he acted as PDP’s Ward Collation Agent, alleged that APC won in his  polling unit by rigging, through cancellation and alteration of the result.

When asked to point that allegation out in the statement he wrote,the witness said: “The alteration and cancellation were not included in my statement.”

Ogunsanya Abiola and Uchenna Peter Umeh,who claimed to have served as INEC’s ad-hoc staff, in the capacity of Assistant Presiding Officers 1 (APO1), told the tribunal that they were trained with INEC’s Training Manual how to transmit election results electronically to INEC server, using the card reader.

Umeh said: “I was APO1. I transmitted the result electronically through the smart card reader. During our training, we were told the server is INEC’s server. We were told the code is confidential and given to only APO1. We were told not to disclose it to anyone, not even this court.”

When asked to point to the provision of the INEC’ Training Manual that permits APO1 to transmit results, both witnesses could not.

Wabi said he had “both oral and written reports of the cases of intimidation and violence recorded in my polling unit, which I sent to my state chapter of the party and INEC.”

When asked if a copy of the report he claimed to have authored was attached to his statement, the witness said: “My report is not attached to my statement because I did not know it will be required.”

Katanga,who had earlier adopted a written statement as his own, said, under cross examination, that he was seeing the statement for the first time.

When asked to show evidence that he acted as PDP’s agent during the election, Katanga said he was issued a tag, but that he did not bring it to the tribunal. He said he gave a copy to his party, which was found not to have been attached to his statement.

At the conclusion of Katanga’s testimony, petitioner’s lawyer, Mike Ozekhome (SAN), requested for an adjournment, a request the tribunal Chairman, Justice Mohammed Garba granted and adjourned further proceedings till tomorrow.

The PEPT will hear the petitions by the Hope Democratic Party (HDP) and the Peoples Democratic Movement (PDM) today.

Navy uncovers over N11m worth of PMS on Lagos Island