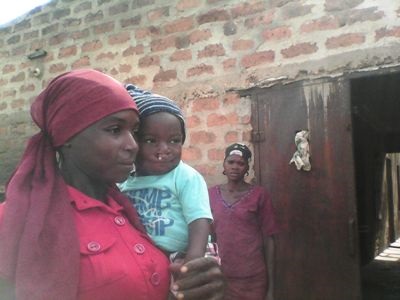 Little Samuel who was born with cleft palate is been classified by the father, Mr. Terna as an evil child and was outrightly disowned alongside the mother, Mwuese and the other four of his siblings.

Cleft is an opening of the mouth which is usually associated with new born due to lack of proper antenatal.

Mrs. Mwuese while narrated her ordeal to Newsmen who visited her in a manage apartment offered to her by a good Samaritan said her child is not an evil one as claim by the father, but only came out with the ailment from birth.

She also said that her insistence on the welfare and survival of her child has made her an outcast even by her own parents.

She said ” A free medical operation was first carried out at the General hospital  vandeikya and was wrongly performed. After the operation my husband sent me and the children away to my fathers house in Guma local government who also rejected me and since then I have been suffering with Samuel and my other children” she noted

Mr Terna who the wife said lives in Wadata area of Makurdi, the metropolis is a primary school teacher had taking little Samuel to a herbalist to be killed but later rejected by the herbalist because he is not found to be evil child.

Poor Mrs Mwuese, a farmer also had a stop in her education said her husband forced her son, Samuel to drink poison hence her husband earlier plan to killed the innocent boy by the herbalist failed.

“My son is meant to die, after the herbalist took my son to the river bank to perform the rituals and be thrown in the river, God protected him because he was not an evil child and the man himself brought him back.

“The herbalist told my husband again that my son is not an evil child but he insisted and asked the man to mixed poison for the little boy to drink and die; but after taking the poison at three instances the boy still remain alive. So my husband send me away with the child calling him an evil child”

The 35 year old mother told our correspondent that she was not use to going for antenatal during her pregnancy period, according to her all the five children including Samuel were all delivered at home that she has not been able to take the child to any hospital due to lack of fund.

Mrs. Mwuese is however calling on spirited individuals and philanthropist to come to her aid for the child to undergo another operation.

NHRC advocates protection of rights for the Elderly