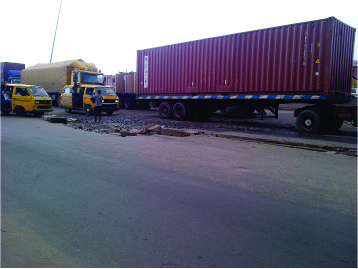 THE Apapa-Oshodi Expressway, being the busiest access road to Nigeria’s biggest seaport and the Murtala Mohammed International Airport should have been the most celebrated if not for the traffic gridlock caused by dotted potholes as a result of the neglect it has suffered in recent time.
Despite the huge promises made by both the state and federal government to alleviate the suffering caused by the traffic gridlock on the expressway, motorists and residents have continued to bear the brunt.
The failed portions of the road are now death traps to motorists due to the inflow of rickety heavy-duty trucks which usually have difficulties meandering through the pot holes.
Commuters have also become easy prey to hoodlums who pretend to be traffic hawkers at night to take advantages of the bad spots to get at their victims. ”this place is a dangerous spot at night.
“These bad boys stay here to rob on traffic because of this bad place” a passenger in a commercial bus said, pointing to an incident where hoodlums robbed motorists at Iyana Itire, recently.
According to an eye witness account, few months ago, a major calamity was averted at the Itire axis when a heavy-duty truck in an attempt to avoid potholes, lost control and hit a commercial bus from behind.
Though no casualty was recorded for the prompt response from the Rescue operatives, but passengers sustained several degrees of injuries and property lose.
Three weeks ago, a container fell on a Toyota Hiace at Cele Bus Stop, killing its occupant. These accidents have become regular occurrence due to the bad nature of the roads. According to eyewitnesses, both vehicles were trying to maneuver through the failed portion of the road.
While calling on the State and Federal government to redirect their attention to Oshodi-Apapa Expressway, some commercial bus operators lament how much they spend on vehicle maintenance every week, coupled with the stress of going through the traffic caused by this neglect.
Passengers are not spared as the incidence always fall on them when the commercial drivers see it as an avenue to increase the fare. Places mostly affected are between Iyana Isolo and Cele bus stop, Sadiku, Ilasa, Iyana Itire and Berliet area.
Meanwhile, in 2013, the Director, Federal Highways [South West] Kabir Abdullahi announced the intention of Julius Berger PLC to begin the phase 2 rehabilitation of the Oshodi-Apapa Expressway.
The Federal government took responsibility to repair the road which started from Trinity, Mile 2 to Cele due to the over two thousand heavy duty trucks from Apapa wharf and Tin Can every day.
With over N2 trillion, income generated from activities at Apapa Wharf annually by the Federal government making it second after crude, the present administration may find reasons to rehabilitate the Apapa-Oshodi Expressway.