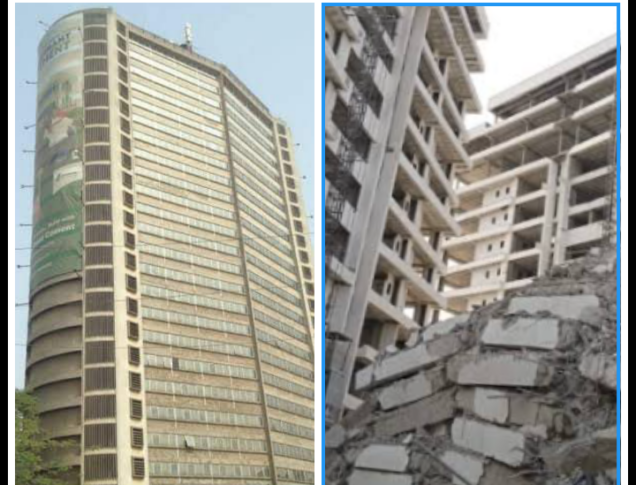 Cocoa House in Ibadan, and the collapsed property in Ikoyi, Lagos, provide a great study in contrasts. While it is clear that the building collapsed because it could not withstand the forces of nature or gravity or as a result of substandard materials or a combination of the three factors, Cocoa House still stands like the rock of Gibraltar.

Not a few Nigerians believed (and still do) that what happened in Ikoyi was the result of not sticking to the specification approved. See the document:

The 26-storey Cocoa House, on the other hand, was built by the old Western Region in 1965. That was with proceeds from cocoa exports. The edifice was built by Cappa and D’Alberto.

Nigerian builders can take their cue from the foreign builders who use a lot of steel reinforcements for their structures. See photos:

On a visit to Nigeria from his base at the University of New Orleans, United States, Professor Niyi Osundare told this reporter about tall buildings that rock or sway to the wind. It was a discussion on why earthquakes are always more devastating in poor countries than developed ones.

Citing the example of The Chrysler Building in New York City, science.howstuffworks explains:

“In addition to the vertical force of gravity, skyscrapers also have to deal with the horizontal force of wind. Most skyscrapers can easily move several feet in either direction, like a swaying tree, without damaging their structural integrity. The main problem with this horizontal movement is how it affects the people inside. If the building moves a substantial horizontal distance, the occupants will definitely feel it.

The most basic method for controlling horizontal sway is to simply tighten up the structure. At the point where the horizontal girders attach to the vertical column, the construction crew bolts and welds them on the top and bottom, as well as the side. This makes the entire steel super structure move more as one unit, like a pole, as opposed to a flexible skeleton.”