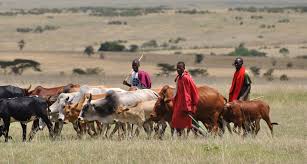 The Biafra Nations Youth League (BNYL) has cautioned the Coalition of Northern Groups (CNG) that ethnic hostilities is no exclusive right of any region in Nigeria, cautioning the groups over fresh call on the Federal Government to impose the RUGA resettlement of Fulani Herdsmen across the country. The BNYL had noted that the entire land mass in the southeast is not the size of two states in the northern Nigeria, adding that same is the south-south. The Biafra Youth League maintained that northern leaders cannot be searching for settlement land in southern Nigeria when they region has huge land mass that can contain all the cattle in the country.

The Coalition of Northern Groups (CNG) had demanded the Federal Government to take immediate measures to end harassment, intimidation, attacks and forceful ejection of pastoralists in southern part of the country following resolution of South East Governors Forum issued on July 9, 2019, which they said has been generating rising tensions around the expulsion and other hostile acts against the Fulani people by many leaders and communities in many parts of Nigeria.

The Coalition issued the warning in a statement by its Spokesman, Abdul-Azeez Suleiman, in Abuja on Thursday. The Coalition of Northern Groups (CNG) noted that the tensions have been made worse by the decision of the federal government to suspend the Ruga settlement project.

The BNYL, in a statement by the Chief Press Secretary, Kufre Obot, warned the Federal Government on the consequences of aligning with the Northern groups. The Biafra National Youth League declared that the Fulani have no place in entire Southeast and south-south, noting that the two regions are small compared to the north. “Kogi is bigger than southeast, Niger State might be bigger than south-south, beside the entire northern states put together. “Is there no land there to resettle these Fulani,” the BNYL protested.

The BNYL Chief Press Secretary, Kufre Obot, chided Governor Nasir El-Rufai of Kaduna State over his statement that the South is 419. “We are proud 419; if you are not smart and brilliant you can’t be a 419. It is because we are 419 that we are fast to discover the biggest 419 called Ruga,” Obot declared.

“Arewa Quit Notice was decided in Kaduna, he didn’t take any action, now another Kangaroo group has emerged to make same threat, if you read Abdulazeez statement on Thursday, he also described the south as criminals, similar to what the Kaduna State Governor has said days ago,” Obot narrated.

The Biafra National Youth League reiterated it warning that “any attempt by the Federal Government to resettle herdsmen in the southeast and south-south will be met with stiff resistance.”

Earlier, the Aare Kakanfo of Yoruba land, Aare Iba Gani Adams, has warned that he will lead his people to war to defend the Yoruba land, declaring that he can still roll out one million Yoruba for war over the imposition of RUGA. Gani Adams had declared that there is no land in the south west to give to Fulani herdsmen for settlement.