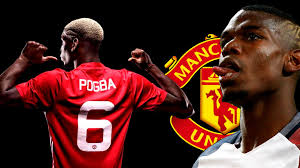 As the transfer window is quite approaching thick and fast so are the speculations over the future of players.

Sequel to the forth coming transfer window, many are largely expecting a return of gossips over Paul Pogba’s future especially considering his antecedent recently.

Conversely, Watford striker Troy Deeney believes that the signing of Bruno Fernandes could play a key role in getting Paul Pogba to remain at Old Trafford.

Obviously, Fernandes who has started his Red Devils career in impressive form is already showcasing why United were willing to spend £67million on his talents.

Though United may be undergoing a rebuilding process under Ole Gunnar Solskjaer, but the future of Pogba remains persistently up for debate.

Unpleasantly to United fan, the French World Cup winner admitted last summer that he was ready for a fresh challenge, and has barely played this season due to injury problems.

And with both Juventus and Real Madrid always circling over Pogba, it suggests United would face a battle to keep their star man, but Deeney who thinks differently feels that things have now changed.

Deeney told the United Stand: “If [Pogba’s] now going, ‘Oh, this is the type of player that we’re signing, cool’.

“Now he’s probably looking at it going, ‘Okay I can see what’s going on here, me and Bruno can do a madness.”

The Red Devils who splashed out over £200m since last summer on new acquisitions still look set to follow that up with another busy transfer window once it reopens with Jadon Sancho, Jack Grealish and Harry Kane all been linked with mega-money moves to Old Trafford.

However, the likes of Chris Smalling and Jesse Lingard are expected to be offloaded to boost the transfer kitty.

Undoubtedly, keeping Pogba will be Solskjaer’s main objective, and Deeney can already envisage the France international forming a solid midfield partnership with Fernandes, with the right support.

He added: “If you put (Nemanja) Matic in behind them or (Scott) McTominay, break it up, you know like Roy Keane used to do, get it, break it up then let (Paul) Scholes do his thing.”