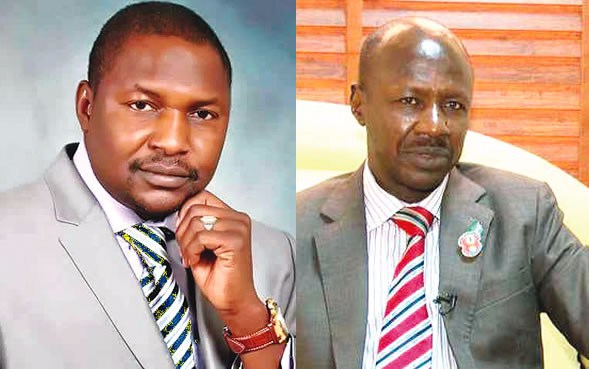 In spite of the mouldy relationship between Attorney General of the Federation and Minister of Justice Abubakar Malami and EFCC Ag Chair Ibrahim Magu, the justice minister has asked the Federal High Court in Abuja to strike out all suits seeking the removal of Magu.
President Muhammdu Buhari is also joined in the plea.
“This honourable court cannot invoke its judicial powers under Section 6(6)(b) (of the Constitution) to hear and determine this case,” the President and the AGF stated in a preliminary objection challenging the competence of a suit seeking Magu’s removal from office.
No fewer than 17 suits filed in relations to Magu’s appointment, following the Senate rejection of the appointment of the EFCC boss as the substantive chairman.
Some f the suits are for while others are against Magu.
One of the suits is said to be pending before the Yola Division of the Federal High Court, another in the Kano Division, while the rest are said to be pending before the Abuja Division of the court.
It was learnt that the President and the AGF took the same position in all of the suits seeking Magu’s removal from office.
Responding to one of the suits seeking Magu’s sacking, jointly initiated by two lawyers, Ahmed Yusuf and Peter Asa, on March 24, 2017, Malami filed a preliminary objection to the matter on behalf of himself and Buhari, who is the fourth respondent to the suit.
The Solicitor General of the Federation and Permanent Secretary, Federal Ministry of Justice, Mr. Dayo Apata, leading Mr. Tijani Gazali and other lawyers in the ministry, signed the preliminary objection on behalf of the President and the AGF.
ALSO SEE: Obasanjo, Osinbajo, others set for Ogunsakin book launch
The suit, marked FHC/ABJ/CS/227/2017, has Magu, the EFCC; the AGF, President Buhari, the Senate, and its President, Dr. Bukola Saraki, as the first to the sixth defendants respectively.
In their response Buhari and the AGF contended that the court lacked jurisdiction to hear the suit because, among other issues, the plaintiffs lacked the locus standi (legal right) to file the suit.
They added, “The plaintiffs do not have sufficient interest in the determination of this matter.
“The plaintiffs’ civil rights were not breached by the defendants.
“The plaintiffs did not meet the necessary pre-condition to file this suit.”
The two defendants, on whose behalf they filed the notice of preliminary objection, prayed for “an order of this honourable court striking out this matter for want of jurisdiction”.
They insisted that the plaintiffs lacked the right to institute the suit but were merely attempting to confer such rights on themselves when they were not instructed by the Senate to file the action.
The preliminary objection read in apart. “The plaintiffs claim to be concerned Nigerian citizens and legal practitioners, thus imparted upon themselves the right to institute this suit, notwithstanding the fact that the National Assembly (particularly the Senate) is a legal person capable of suing and being sued. The Plaintiffs did not depose to the fact that they were instructed by the Senate or the Senate President to institute this suit.
“The plaintiffs are seeking inter alia an order restraining the 4th defendant from re-nominating or representing the name of the 1st defendant (Magu) to the Senate for appointment as the chairman of the Economic and Financial Crimes Commission.”
The two defendants maintained that the suit was wrongly instituted by the two plaintiffs and ought to be struck out.
What is of interest to many, however, is that Malami amd Magu, including their offices, have been at loggerheads since 2015.
It is widely believed Buhari’s Chief of Staff Abba Kyari is moving the AGF to frustrate Magu because of Kyari’s vested interest in many of the cases the commission is probing and prosecuting.