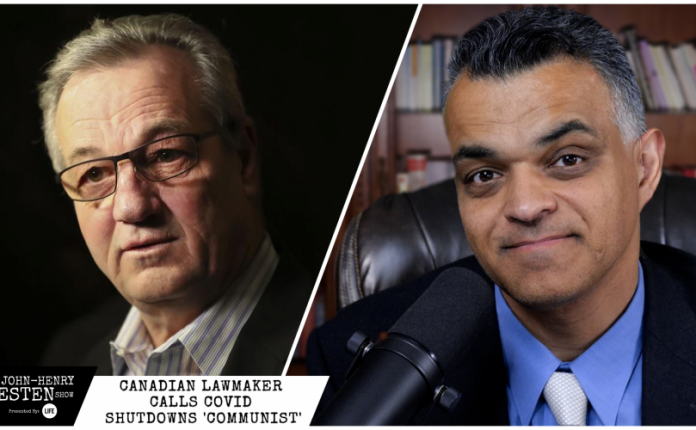 An Independent lawmaker in the provincial parliament, Ontario, Canada, Randy Hillier, had raised alarm that the globally acclaimed coronavirus pandemic is false, degenerating into corrupt and untrue media propaganda to create fear.

Hillier protested political actors in Canada and most Western liberal democracies have become corrupt and untrue to their constituents with the coronavirus propaganda creating fear and uncertainty in their communities.

Randy Hillier, one of a few political actors in Canadian that have been challenging coronavirus promoters to verify the authenticity of the virus, had expressed strong opposition to lockdowns in various countries of the world, and the interventions of governments since early 2020.

Hillier, an independent lawmaker of the provincial parliament in Ontario, Canada, in an interaction in an episode of The John-Henry Westen Show, decried that that he noticed in the beginning of the pandemic that the Canadian government was engaging in “false apocalypse” with fear, which culminated into the Declaration of Emergency. According to Hillier, I “thought it was an obligation to speak out about what was obvious to me, but was also clearly too dangerous a subject for any politicians or media to actually speak truthfully and honestly about.”

The independent legislator lamented that politician in Canada and most Western liberal democracies have become so corrupt and untrue to their constituents on the coronavirus propaganda. Hillier shared his unique perspective as an insider of the world of politics for over 12 years; highlighting that every discussion among politicians “is viewed singularly through how will this impact, how will it improve, or [how this will] lessen the reelection of the party.”

The Canadian legislator bemoaned that politicians really care more about wealth and power than the people.

Hillier was of the view that coronavirus brought the imposition of communism to the entire world, having originated from the Communist China. He maintained that governments across the world have “accepted and adopted communism as a cure for a respiratory virus,” where was implemented through lockdown and restrictions, compulsory mask wearing, and the ban of proven medical treatments such as Ivermectin and hydroxychloroquine.

Hillier advocated that every Canadian should learn from the history of the past year; admonishing all “Canadians to understand how our country, freedoms, and families have been destroyed.”

The legislator further advocated: “it will soon be “time for us to restore our faith, restore our freedoms, restore our responsibilities, and be ever-vigilant never to be so casual and dismissive in giving them up again.”

He had pointed out that the phenomenon “is a reflection of the erosion of our society over so many decades.” The legislator also argued that “by fining and jailing people for just being with their family and friends or voicing an opinion shows how “there is no country” anymore.”

Hillier’s arguments presuppose that countries or governments of the world have lost their sovereignty or independence to the coronavirus regime.