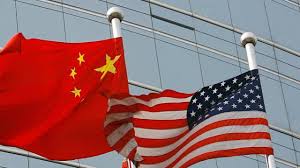 Share this on WhatsApp
Spread the love
Shanghai stocks tumbled nearly 4 percent on Tuesday to a two-year low as U.S. President Donald Trump’s fresh tariff threats against China raised the specter of a full-blown trade war.
The Shanghai Composite Index plunged more than 5 percent at one point in late trade before finishing the session down 3.8 percent at 2,907.82 points.
The blue chip CSI300 index fell 3.6 percent to 3,621.12.
“It’s the darkest hour…the most agonizing moment in the first half,” Zhang Yidong, strategist at Industrial Securities wrote on Tuesday.
“There are disaster victims everywhere,” he said, citing the triple-whammy of the Sino-U.S. trade spat, Beijing’s regulatory crackdown on riskier lending practices and global liquidity tightening.
The tech-heavy start-up board ChiNext tumbled nearly 6 percent to its lowest level since January, 2015.
Stirring memories of the equity market crash in the summer of 2015, over 1,000 stocks slumped by their 10 percent daily limit as Chinese investors dumped stocks across the board.
On Tuesday, China’s commerce ministry said the country would take “qualitative” and “quantitative” measures, and “fight back firmly” against additional tariff measures by the U.S. government.
The statement came after Trump threatened to impose a 10 percent tariff on $200 billion of Chinese goods, raising the stakes in the tit-for-tat trade conflict with Beijing. He said the move was in retaliation for China’s decision to raise tariffs on $50 billion in U.S. goods

Share this on WhatsApp
Related Topics:ChinaTradeUnited State
Up Next