As US President Donald Trump continues its opposition against global institutions and treaties, the World Health Organization being the latest, other super powers, especially in Europe, are aligning against him too.

Trump wrote a letter to the world health body Tuesday, accusing it and its director general, Tedros Ghebreyesus, of colluding with China to help spread the pandemic. He threatened to make permanent his suspension of the US funding of WHO except the organization finds a quick fix to the pandemic..

The body agreed Tuesday to launch an investigation into its coronavirus response.

Ghebreyesus, however, said dealing with the pandemic must come first, as COVID-19 continued to unleash death and economic devastation across the planet.

While other leading members of the UN agreed to that decision, they still left a note of disgust for Trump’s unilateral decisions.

Beijing, the real object of Trump’s attack,  hit back at him Tuesday.

“The US tries to use China as an issue to shirk responsibility and bargain over its international obligations to the WHO,” foreign ministry spokesman Zhao Lijian said.

“We are against breaking everything there is for the sake of one state’s political or geopolitical preferences,” deputy foreign minister Sergei Ryabkov was quoted as saying by news agency Interfax.

The European Union also backed the WHO, saying it was “not the time for finger pointing”.

Trump has been under pressure in the US where close to two million Americans have been infected, and more than 100,000 have died.

The pandemic is also ravaging Britain, killing more than 40,000 people as it eats into Latin America, starting from Brazil with 225000 people infected.

Covid-19 has killed well over 300000 across the world as scientists double down on research to develop vaccines or drugs. 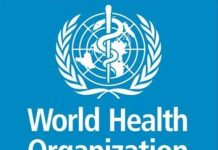