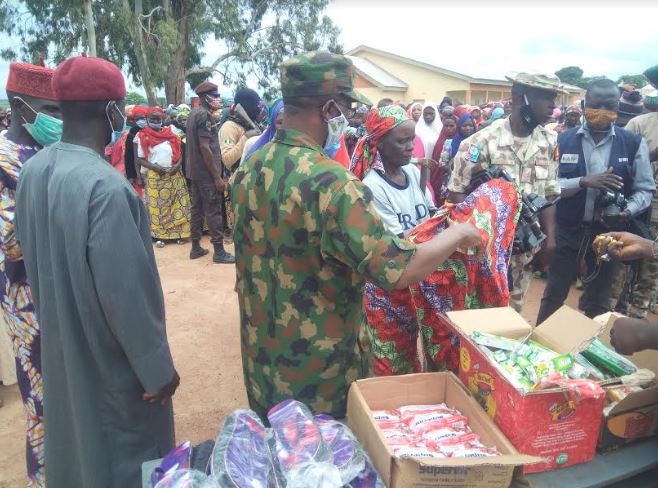 However, speaking during the distribution of the palliative, the Chief of Staff OPSH, Brig Gen Barnabas Sakaba, who represented the Commander, said the palliative was to assist residents of the community and help them cushion the economic effect of the dreaded coronavirus disease, commonly called COVID-19.

According to him: “The gesture is part of the Operation ACCORD which the OPSH has leveraged to engage in a couple of Civil – Military Relation activities. Palliatives have been shared to several communities in 6 LGAs in Plateau State”.

“A primary school is being renovated by the Defence headquarters at Kpashio in Bassa LGA and the Army headquarters built and equipped a clinic at Tigi in Ryom LGA. The distribution of palliatives is expected to continue throughout the Operation”, he said.

On his part, the Defence headquarters representative who was in Jos to witness the gesture, Air Commodore Edward Adedokun, applauded the excellent relationship that existed between the OPSH and the residents of the benefited communities.

Adedokun urged the people to continue to be law abiding, adding that the defence headquarters will continue to support the OPSH in ensuring that the normalcy currently enjoyed is sustained.

Also speaking during the distribution of palliatives, a village head who spoke on behalf of the communities, thanked the OPSH for the show of love, explaining that they have not experience the COVID-19 palliative from any organisation or individual, except from the Military Task Force.