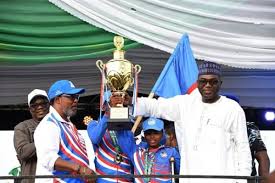 Team Delta which won previous editions also erased the medals record at the games after surpassing the 27 gold medals it had when it won the fourth edition.

Team Lagos finished a distant second after winning 21 gold, 36 silver and 14 bronze medals. Team Lagos which had finished second at last year’s edition with 24 gold medals had initially been touted to unseat Team Delta at this years edition.

The Governor of Kwara State Alhaji Abdulrazak Abdulrahman while thanking the States for participating assured that next years edition will be better while the Minister for Sports Mr Akin Dare represented by the Permanent Secretary in the Ministry said the competition had produced future athletes for the nation and the ministry will continue to invest in the ground.