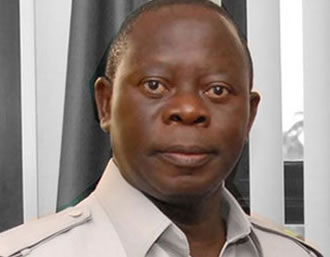 FOLLOWING objections to his choice of a successor from leaders of the All Progressives Congress (APC) and the respected Bini royal family, Edo State Governor, Comrade Adams Oshiomhole midweek made a back track and included two others in the kitty.
The new entrants in the governor’s choice of a successor are the Deputy Governor, Dr‎ Pius Odubu and the state’s Works Commissioner , Osarodion Ogie. Mr Godwin Obaseki, currently head of Oshiomhole’s economic team was reportedly the clear favourite of the governor until he stirred the hornets nest in Bini Kingdom.
Obaseki particularly incurred the wrath of the royal family as well as other prominent chiefs when he stated that Benin would not have been defeated by the British colonialists had Oba Ovonramwen N’gbaisi heeded the advice of his great grandfather, Chief Agho Obaseki.
The statement which relates to the British invasion of the ancient Benin Kingdom in 1897 and the subsequent movement of Oba Ovonramwen to exile in faraway Calabar reportedly incensed the palace and other members of the royal family because of what they termed as misrepresentation of facts.
One of those who openly‎ tongue lashed the gubernatorial aspirant was Princess Roberta Williams, a great grand daughter of Oba Ovonramwen, who also accused Obaseki’s father of treachery and alleged insubordination to Oba Eweka II who succeeded the monarch forced into exile.
Hear her: “Mr Obaseki lied to the people because Chief Agho deceived Oba Ovonramwen to go on exile to Calabar where he died on 13th January, 1914. Chief Agho Obaseki wanted to be crowned as the Oba of Benin, an attempt to truncate the millennia old primogeniture tradition of succession of father to son in Benin Kingdom. But loyal chiefs and the vigilant Edo people kicked against that sacrilege and insisted that Ovonramwen’s son should succeed the throne”.
National Daily learnt that the Comrade Governor decided on a middle cause and instead allegedly submitted three names to an inner caucus of the party for fear of a possible backlash and outright rejection of Obaseki as an acceptable successor when his term ends sometime in 2016.
The submission of the three names has interestingly opened the race as several aspirants were of the opinion was a fait accompli and had opted to either fight the governor directly or opt out of the race as far as getting the ticket of the party is concerned.