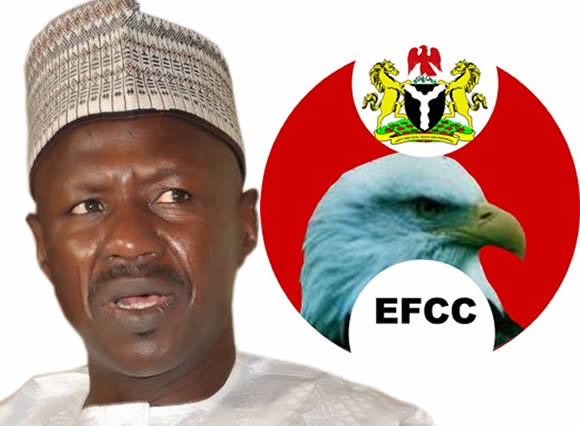 Acting Chairman of the Economic and Financial Crimes Commission (EFCC), Ibrahim Magu, on Wednesday said agency had recovered $2.9 billion between May 2015 and October 2017.

Speaking at the ongoing 7th session of the Conference of the States Parties to the United Nations Convention Against Corruption holding in Vienna, Austria, Magu said the commission had recovered $43 million from former Minister of Petroleum, Mrs. Diezani Alison-Maduke.

In a presentation titled: ‘International Cooperation in Relation to Technical Assistance: The Nigerian Experience’, Magu said the sum was exclusive of smaller currencies in Durham, CRA and British Pound.

He said the commission had made a lot of recoveries locally using the mechanism of the non-conviction based forfeiture provided under Section 17 of the Advance Fee Fraud and Other Fraud Related Offences Act, 2006.

“Within this year alone, the commission recovered stolen assets running into several millions of US Dollars and billions in naira,” he said.

“These include the sum of $43 million recovered from Deziani Allison-Madueke, Nigeria’s former Minister of Petroleum and N2 billion spread in seven accounts within three Nigerian banks laundered from the Federal Capital Territory Police Command Salary Accounts.”

Magu, who was a panelist at the Implementation Review Group attended by over 100 delegates, detailed the Nigerian efforts in asset recovery.

He said the country had also made progress in specific cases related to Abacha loot, Malabu Oil, Diezani and associates, and the arms procurement scandal.